There is a cat I’ve named Au Lait whom I’ve seen about the apartment building lately. I’ve mentioned him previously. He came to drink from the outside water-bowl recently. I have since learned that he is known to another resident in the building, who has named him Blue, because of his eye-colour. 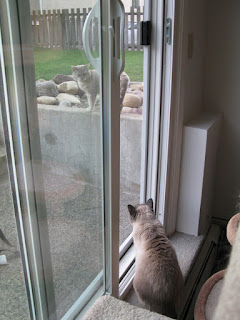 Blue has been visiting the other resident for a while, and eats there from time to time. Blue is a bit aggressive with the other cats, and has not been neutered. I and my fellow resident have discussed getting Blue fixed, but the logistics of that operation may be difficult. He does not like being touched. We will continue to work on a plan.

Blue (Au Lait what was) seems a confident, strong fellow, able to take care of himself in the wild. Nonetheless, he is welcome at the outside food- and water-bowls. It never hurts to have a place to come to for support when all else fails. It’s something from which we would all benefit, I think. 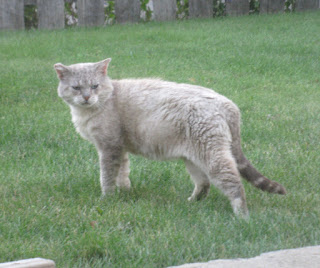