The outsider-cats’ food-bowl must be feeling rather lonely these days, and that has me worried. It’s been a week since I have seen Sable and Sablette, and previously they were frequent visitors.

I last saw them July 21. It was after dark, and I had already taken in the food-bowl for the night. Sable came to the window of my bedroom and squeaked, to let me know that she and her sister were there, but the food was not. Before I could bring out the hard-food, as requested, there was a ruckus at the far end of the apartment building; it sounded as if a cat was being attacked. I saw one of the two sisters running from that direction. She stopped near my apartment and did not look or act injured.

Nevertheless, when I delivered the food, Sable and Sablette ran off, in different directions. That was the last I have seen of them. No one has been by my ditch to sample the food or water, except a skunk, who has come to slake his thirst, and leave the water-bowl tipped at an angle. (The food is taken in to discourage his visits.) I have not seen Au Lait/Blue or Vincent, or any of the others who have come by from time to time.

I am most worried about Sable and Sablette. The other cats are known to go to another resident’s food-bowls for nutrition, but the two black cats do not. They had become accustomed to me, and to being watched by my beasts, an observation which does not bother them. But in a week, the sisters have not come by. 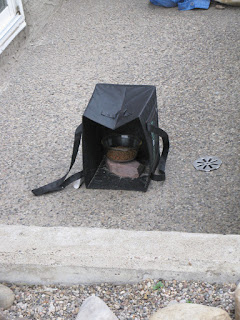