Never take anything for granted when it comes to pets. I should know that by now.

A couple of weeks ago, I wrote about how Cammie had eaten some soft-food, had an adverse allergic reaction but had recovered on her own. This was certainly the case, I believe. I further believed that the food that makes up the bulk of her diet assisted in the recovery.

Last week, Cammie suffered another allergic reaction. This time, I could not find any cause for it but the secondary hard-food she eats. She has been consuming Orijen for years and, after I determined that one kind of soft-food after another was bad for her, it became the only variety of food the princess ate. It was superseded by Z/D, but not entirely replaced. The Orijen remained available for her to eat, as it was for most of the others.

The usual remedy for her reactions is an injection of Cerenia, delivered at the veterinary hospital. This was duly administered, and Cammie came home. I would keep her off Orijen completely. A couple of days later, however, her stomach began rejecting her food again. What was disturbing about this episode was that Cammie was not keeping down the Z/D. As that was now the only food that she could tolerate – so I thought – this development bordered on the disastrous.

The long weekend was approaching, which meant the veterinary hospital would be closed for three days. I decided on Friday to have Cammie given another injection of Cerenia. It had been necessary to give her two such shots to placate her stomach once before, so the failure of the first is not unprecedented. But I went further, and had a complete examination of my girl. I wanted to know if anything else could be found that might explain her repeated episodes.

As it turned out, Cammie is in very good shape for a thirteen year old. There was some progression toward kidney failure, but that was expected from previous exams. It might as well have been explained by the slight de-hydration she was suffering. (Fluids were given.) An indication that she was experiencing an allergic reaction was, of course, obvious. Nothing other than food sensitivity was discovered to cause her vomitory episodes.

The doctor would have been reluctant to give a second shot of Cerenia so soon after the first, but Cammie’s good test results, and the fact that an injection might not be possible for several days, decided the issue.

This time it seemed to take. Cammie ate nothing Friday evening, but began nibbling Saturday morning. By that evening, she was eating more, and her appetite was regular by today. Another crisis had been overcome.

As I have mentioned before, I cannot be complacent about Cammie. I forgot that, and thought that her body was gaining strength against her allergies, when in fact it may have been losing ground. I cannot have her eat anything now except the Z/D; even this food may be rejected by her stomach if she gets into anything else. I would sequester the princess in a room by herself while others are fed, but her protests and the difficulty of corralling her for such an operation would be enough to upset the others, and put them off their meals. The only solution is extreme vigilance. I cannot take anything for granted, and counting my chickens even after they have hatched is no guarantee of a full and secure hen-house. 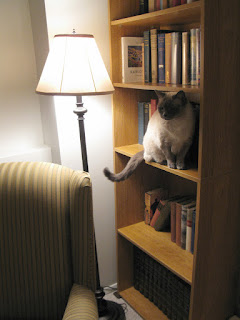