Beulah’s surgery went well today. Because it was a spay – quite an intrusive procedure – she will be spending at least one night at the cosy apartment. The weather has turned chilly and she will rest – if rest she can in such strange and probably frightening surroundings – and receive plenty of food while she is here. I haven’t fed her much yet, as I didn’t want it to react adversely with her post-operative condition, but she will receive a large helping to eat through the night, if she likes.

She is about two years old, the doctor estimates, and weighs a mere 2.7 kilograms (six pounds) but, while slender, she isn’t thin. In other words, it is not an unhealthy weight for her. She wasn’t pregnant. How a feral girlcat avoided that, I don’t know, but I have seen her interact with other felines, and she stands up for herself pretty well.

Beulah is definitely feral and, though she could likely be tamed with time and patience, there is no where for her to go. It’s the same old story. Raleigh presented a different situation, as he required little more than a few days to remember his past with people. I suspect that Beulah was born in a feral state, or began living in one as a kitten; she is not entirely shy with people, living in proximity to them and receiving their food. But she has certainly never been an indoor cat, as Raleigh had obviously been. Beulah’s nature would demand a much more protracted programme of socialisation, and that is simply not available.

For now, she is in a large kennel, with room to stand and stretch, with a little litter-box and a towel to soften the floor. Tomorrow, or the next day, she will be released back into the only life she has known. But she will be have a better capacity to withstand its dangers, and will never have to worry about providing for little ones. She need take care of only herself – with a little help from her human friends. 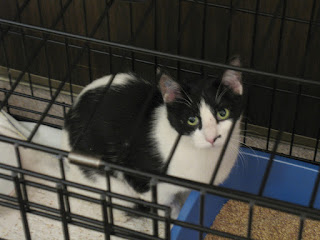