Tucker’s surgery was the big news of last week; the loss of all his teeth, and the discomfort the roly poly is suffering continues to be of significance in the cosy apartment. But the day after Tucker’s ordeal, Parker had a unique experience of his own.

Some weeks ago, an after-school programme in our town called the rescue-group of which I am a member, and inquired if we would like to send a representative to give a talk to children about cats. It would be a marvellous opportunity to tell them about the care of cats, their health and needs. I volunteered to be the one to give the presentation, and thought it might be good to bring along a visual aid: Parker.

I chose Parker because he is a confident, out-going fellow, impressive to look at, and big. He is also accustomed to being on a leash and harness, which he would need to be under the conditions envisioned. All was arranged, and, Friday afternoon, Parker and I headed to a local school to give a talk.

Things did not go quite as planned. Parker was rather more nervous than I had expected, and was a bit growly. Though he is used to meeting people - indeed, he likes to receive attention whether from friends or strangers - I think the nine children assembled to meet him were a bit too much for him. Their ages ranged from six to eleven; they were not noisy or impolite. They were interested in the talk and in Parker. But children probably are perceived differently by a cat than are adults. Children’s energy levels, even when they are quiet, are greater, and so a cat likely picks up on tension waiting to be released.

Still, I had a good interaction with the children, was asked many questions, which I was able to answer, thank goodness, and the boys and girls did get to pet Parker, who was calmer by then. He was, however, ready to go home, and had spent some of the period in his carrier, waiting for me to take him away. While the episode was a bit disappointing, it was not unsuccessful.

If I were to be asked to give such a talk again, I might try bringing Renn or Josie, especially the latter. While these two are not used to being on a leash, they are both very friendly, but without Parker’s temperament, which can show annoyance more readily than either of his foster-siblings. (The orange boy’s reactions at the school were similar to what they are when I end a walk too soon for his liking.)

We’ll put this one down as a ‘learning experience’, which is another way of saying ‘mistake’. But no harm was done, the children had a decent time; they learned a little, as did I, and Parker was not too miffed after he returned home. You know what they tell you in show business: never work with children or animals, especially orange cats. 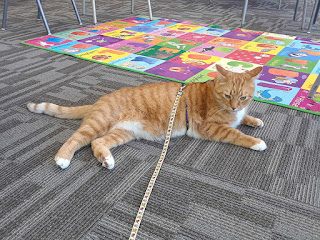