Sometimes, something happens that startles one into using an expression one doesn’t often use, except in a moment of extreme surprise. Puzzling over the deleterious and possibly deadly effects of Parker not eating, or eating very little, I was running out of ideas. I would call the veterinary and ask about a B12 injection. I would try Parmesan cheese or dried meat sprinkled on his food. But these solutions would not be available until Monday. A friend in my rescue-group, in the meantime, told me to offer Parker some Recovery.

Recovery is a nutrient-heavy tinned food that is, as the name implies, used to build up in a cat what illness or other harmful conditions have taken away. None of my cats has liked it. But, oddly, some other felines have. I keep one or two tins in my cupboard at all times, in case they are needed when they cannot otherwise be obtained; the food may be purchased only from veterinary hospitals. This morning, I thought that there was no harm in following this latest suggestion. I opened a tin and spooned out a small amount for the orange-boy to sniff.

He sucked it up as if his stomach had developed a black hole. I gave him more and it similarly disappeared. At one meal, Parker ate half a large tin. He would have consumed more had I given it to him. But, while I had a second tin at the ready, I also had the rest of the day to get through and, if he continued to eat as he did for breakfast, I would need to ration it.

Fortunately, Parker just finished off another large portion of Recovery for his luncheon; breakfast was not just a one-off event. One tin is gone, and a second begun. I have three-quarters of it to last through what, during Parker’s glory days, would have required a whole tin. Tomorrow, I will buy more, and the sturdy-boy will have as much as he likes. It is expensive, more so than the best quality pet-foods, but it will be worth every penny to see it disappear into my friend.

I must, of course, caution myself that this development does not change the basic problem with Parker’s liver or bile duct. This still needs to be addressed, and there may be nothing that can be done about it. But, as long as he eats, and eats well, it will provide his body with strength and his heart with morale. It gives me a means with which to feed him his crushed medicinal pills, and it gives us time. Perhaps most important, it makes Parker feel good. There is nothing better for the spirit than a full tummy. He purred tremendously after his first decent meal in a couple of weeks.

I hope to hear that sound some more. 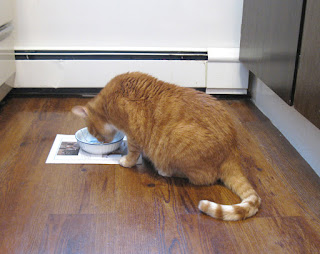