Where He is Going


My friend Parker is not doing well. The Mirtazapine which was intended to enhance his appetite has had no effect. In fact, after I gave it to him Friday evening, he lost even the small interest he had had in food, and did not eat again until the next day. Even then, though he wanted to eat, he consumed only the small amount he has been eating at each meal for some time.

The orange-boy has been transferred to another doctor at another hospital. She agrees with Parker’s previous veterinary that his diabetes is not causing his current liver problems. There is something else. Though the liver can suffer damage from anti-biotics, the doctor wants her predecessor’s prescription of two weeks’ worth of anti-biotics maintained. Parker would then be brought in again for an examination in three weeks’ time. To be honest, if things continue as they are, my friend won’t last that long. I feel that he has cancer.

I think he is in some discomfort, though not pain. He moves from one position to the next, lying on the bare floor, then on the carpet, then at the base of a cat-tree, then on the bed. I woke very early this morning to find him lying on the dining table. Though he does that from time to time, and always has, he has never done it at night, and he wasn’t sleeping; he was lying prone but staring off into space.

On Monday, I will talk to the doctor, and see what can be recommended. Perhaps B12 as an appetite-stimulant. In the meantime, I am trying all the kinds of food I have, soft and hard, to interest Parker in eating. The only item he cares for right now is Fancy Feast ‘seafood’ variety, and he doesn’t eat much of that.

I believe this coming week will be significant in the sturdy-boy’s survival. We will see what it will bring. 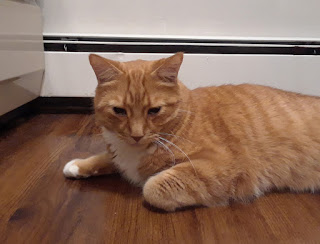