Tucker’s experiment with the new blood-glucose sensor ended Friday. The ‘cap’ that held the sensor in his skin was coming loose, and since the monitor that read it had to be returned to the veterinary hospital within six hours of the last reading (otherwise the information recorded would be lost), I decided to take it in on Friday. If the cap had come off during the night, or when the hospital was closed, it would have been an open question of getting the monitor back to the doctor in time.

Even so, the experiment was a success. I expected a telephone call from Tucker’s doctor on Monday or Tuesday. She and her colleagues must have been eager to see what the device would tell them, because I received a call from her Saturday afternoon (when the hospital was actually closed).

She was very pleased with the results. They gave a very full picture of Tucker’s diabetic management over a week’s time. (I will be handed a print-out of the results when I am next at the hospital.) For the most part, what they show is very good. The roly poly had good to excellent ‘curves’ in relation to his insulin injections, the diabetes responding as it should. Wednesday, however, showed very high numbers with very little response to the insulin. This was followed by a drop to low numbers, too low for insulin to be administered.

This has happened in Tucker’s history of diabetes, rarely, but more often in recent times than previously. The fact that most of his ‘curves’ are satisfactory or better proves that he is not insulin-resistant, as some cats become. This is a relief in itself. But how to account for the times that show no response to the insulin?

The doctor questioned the injection sites for the insulin. I almost always give Tucker his injection in the same places: on either flank, usually; just through habit, within an inch or two of the same spot. This has been going on for years. While theoretically there is nothing wrong with this, it can cause scar-tissue to develop, which will inhibit, not the insulin itself, but its delivery. In other words, it might be having difficulty getting through a callus.

The solution suggested by the doctor is simple: selection of another spot on Tucker. I can inject the insulin in the scruff, the tummy, or another location. If I move it after some time, it likely won’t permit for scar-tissue. This may not be the answer (because a callus may not be the question), but it is a likely solution to the mystery, and easily applied.

Even with these lapses, the doctor is very pleased with Tucker’s diabetic management, and very pleased with the new sensor and how it worked. I am, as well. Not only did it provide an excellent depiction of my cat’s situation but it gave scope for a concrete response to a problem.

I asked questions regarding the sensor. I wondered how it gathered blood samples for reading the numbers. I thought it tapped into the capillaries just beneath the skin. It does not. It samples the sugar in the subcutaneous flesh and, using a formula in its miniature computer, translates the numbers it reads into the equivalent that would come from blood. Rather ingenious, I think.

In theory, there is no reason why a cat can’t have one attached to him all the time. It cannot remain in the same place, as natural feline movement and the re-growth of shaved fur will cause its detachment. But another may be applied in another location. Practically, not every cat-owner will favour such a policy, and, for the time being, the veterinarians see the sensor as something used to study a cat’s diabetic routine, and to help clarify problems. Even in this capacity, I feel that the new device is a success.

I can foresee, in the not distant future, a smaller, flatter item implanted under a cat’s skin, lasting six months, a year, or longer, giving the owner the peace of mind that comes from knowing instantaneously what his little one’s numbers are, and if there is a problem; giving a ‘curve’ without fuss or discomfort.

For now, the experiment is ended, with good news all around. Tucker has a little bald patch on his right shoulder for now, but, aside from licking it periodically, it troubles him as little as did the cap itself. The doctor is happy with how my guinea pig is doing; I am, too. And so, I think, is the guinea pig. 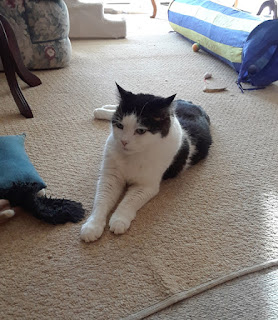