It Must Be Sunday: I'm at the Vet's

Another weekend, another health crisis… Josie had to make an unscheduled trip to the hospital today.

Early this morning, my Chubs was fine. She ate breakfast, she demanded her treats, she drank water. Then, about mid-day, I saw her wetting on my bed. She had never done that before. While I was taking the bedclothes to the laundry, she threw up. I know it was her because of the contents that had been discharged, and the fact that it was in the bathroom; only Josie tries to get to the bathroom if she has to vomit.

Things grew worse as she started going to the litter-box but not leaving anything in the litter but her pawprints, though she had probably emptied what remained in her bladder on my bed, for a second time. She was crying by this time, obviously in distress, if not pain. She eventually just lie down in the litter-box.

I called the hospital and arranged for an emergency visit. The doctor examined my old lady and found that her bladder was indeed empty, so whatever was causing her to think she had to urinate was not urine. There was nothing that would indicate a mass or intrusion, and she was not constipated. If it were not for the vomiting, the doctor would have suspected a urinary tract infection, like the one Josie suffered two months ago. I know the Great White throws up more often than my other cats, and this morning may simply have been coincidental, exacerbated by whatever else she was feeling.

She was given an injection of Cerenia nonetheless, but also some anti-inflammatory drug. I was provided with a vial of anti-biotic, for I believed by this time that Josie was facing not an extraordinary internal situation (that is, cancer, which is always a fear of mine) but a simpler but still dangerous infection.

For two hours after her return home, she rested quietly, even sleeping; I could hear her snoring. Then she woke and started crying again, and once more attempted to wet in the litter-box without success. I called her doctor and was able to obtain some pain-killers for Josie, which I should have done during the first visit. My old girl is resting tranquilly once more. I will see what the night brings.

There are several possibilities in my mind. One, the best and, I hope, the likeliest, is that she is fighting an infection but, until it vanishes completely, is making her uncomfortable, even causing her pain. This scenario suggests that the pain will disappear with the infection. She may have a kidney-stone, or something stuck in her bowels. I don’t know the symptoms of these ailments – other than that the kidney-stone causes agony; I know this from personal experience. In any case, I will ask about these possibilities tomorrow, when I call the animal hospital.

I intend to reduce the amount of joint-medicine she has been receiving. I will also give her less frequently the mild laxative she has been getting. I don’t want to give her too much of too many medicines.  They will be eliminated all together until her current anti-biotic doses are done.

The doctor told me that Josie is in very good shape for her age, aside from today’s problem; weight, temperature, heart and lungs are all good. It may be, after all, that my Chubs is dealing with something very unusual but, hopefully, treatable. We will see what tomorrow brings. 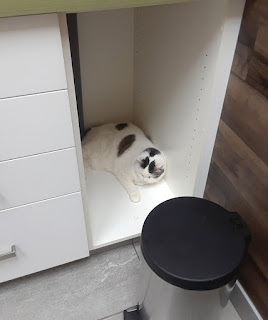