Josie of the Four Years

Josie came to live with me on Christmas Eve, four years ago. She was meant to be a companion and friend to my first cat, Tungsten. She turned out to be the former, but not the latter, though they do tolerate each other. Thus do our pets confound our plans. 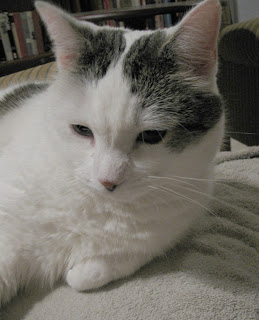 Josefina von Chubs was five years old when I adopted her. She had been rescued from a truck engine, where she had been clinging as a kitten, in fear and, possibly, for warmth. The owner of the vehicle had tried to pry her from her perch but could not. That would be the fear bit, I imagine. So he drove to a location where he knew a cat-rescuer lived, with the Josie-to-be still under the hood. She was unharmed but probably quite jarred. Josie was rescued. 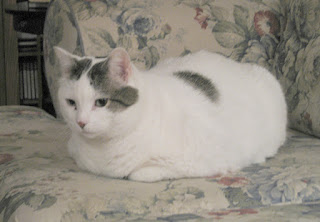 I can’t imagine her as a kitten. When I decided to meet her, she was living in a very cat-crowded house. She received care but not, I suspect, much attention. I am told that some people were interested in her at one point but she did not come out from under a table to meet them. I imagine conditions in the over-populated house kept her on edge. 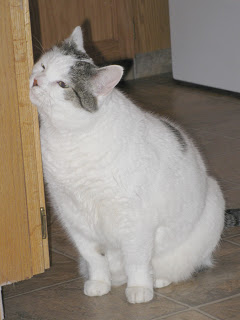 Eventually, I asked to be introduced to Josie. She was brought to another location to meet me; she was very excited, purring and bumping her head against everything. I thought that this was a cat who would be friends with Tungsten. It turns out that that evening, Josie was rather uncharacteristically ebullient. She is not exactly taciturn, but she is rather aloof. She may have been simply excited at the strangeness of the event. I decided to take her in on what turned out, for that rescue group, The Lethbridge PAW Society, one of the first ‘trial-adoptions’, which has become a standard policy with them. 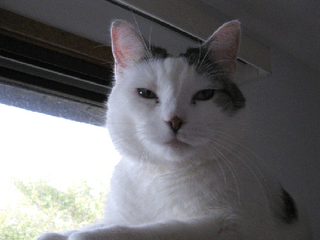 I have recounted elsewhere in this blog how Josie and Tungsten did not get along and how worried I was that I had made a mistake. But things calmed down and the two cats learned to co-exist. Josie soon became my Chubs, and is of course part of the family.

Josie has evolved over the years but slowly. She’s grown fatter. It’s easy to determine that she’s overweight because she spreads out like a Baggie filled with Jell-o when she lies down. As well, her head is small compared to her body. But she is eating a little less these days, actually deciding that she has had enough, when there may very well be some food left for her in the dish. But she is eating better now, too. I am always open to giving the beasts a better quality food; whether they are open to eating it is another thing. When she is hungry, though, she will let me know, and greet the appearance of the hard-food bowl or a dish of soft-food with a cry that sound quite like a cheer. 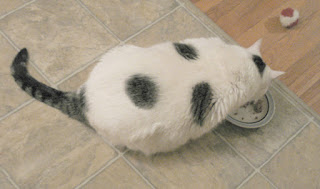 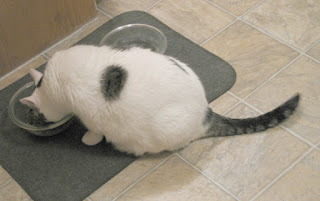 She is the mistress of the food-bowl. Even Tungsten, our top-cat, makes way when Josie, like the Duchess in “Alice in Wonderland”, lays her pointed chin on someone’s shoulder. Josie eats first, which may explain her heft. 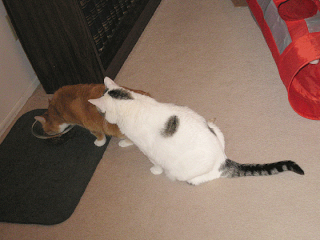 My Great White has always been open to playing, though she has rarely been energetic about it. She still enjoys the string-toys the best when I am playing with her. But in the past year, probably less than that, she has developed a relationship with Tucker, based solely on chasing and being chased, but just when I return from work in the evenings. I will hear them running about in the sitting room and kitchen while I am changing in the bedroom. These two heavy animals sound like bowling balls rumbling across the hardwood floors. One will dive into the nylon tunnel, then shoot out to surprise the other, or hide behind a fold in the carpet, only to race away when the other rushes by. Their games are always short-lived, but they enjoy them, so I do, too. 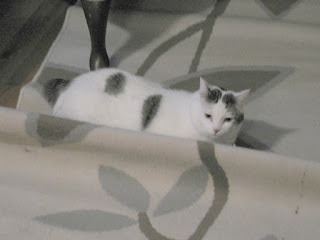 Josie was never a lap-cat, but recently, she has acquiesced to being pulled up and placed on my lap. I have grown to know her well enough to realise that she enjoys the attention these days. She will lie down and purr as I rub the back of her neck, or stand up and knead my legs, She also likes a soft, steady rub under the chin. When she is on a chair, I will kneel beside her and start petting her. She will get up, revolve, then settle down again in exactly the same place and position. Getting up should not be mistaken for being finished. 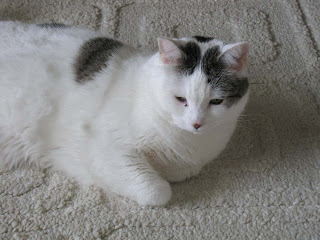 She is older now, nine years of age, and, though still able to get around perfectly well, she seems to find it hard to jump up on the bed, needing - or is it simply wanting? - to pull herself up as much as propelling herself. I will look into getting a set of steps for her. Other than that, she is doing well. A veterinarian warned me against her increasing weight, and I am concerned about that. The doctor suggested that Josie may develop diabetes later, and require injections. This would cause Josie to resent me, and me her, so the theory goes. But Josie doesn’t hold grudges. Because my Chubs can’t reach her rear end to clean herself properly, I have periodically to do it, taking her to the bath-tub and applying warm water and a cloth. She cries and grumbles and scrabbles on the bottom of the tub; being held in place during this great indignity causes her distress. But afterward, when I’ve dried her and lifted her out and told her she can go, she hurries off, cleans herself ‘properly’ (as much as she can) and rests from her ordeal. A minute later, she purrs when I pet her and apologise. My Great White doesn’t hold grudges. And I could never feel angry at helping her. 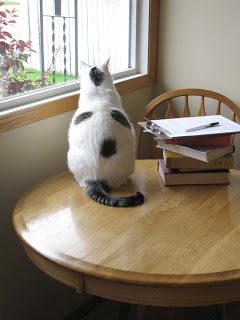 So Josie celebrates the completion of her fourth year with me. She is cranky sometimes, though that’s nothing new. She wakes me on holidays by walking across my back and sides to let me know the food-bowl should be made available. She’s lazy and her bum is messy now and then. But she is usually the first at the door to welcome me home after I’ve been out, and she purrs loudly and unashamedly these days when I rub that little head of hers. Four years isn’t a long time for a cat to be with someone, really. Twenty-four wouldn’t be long enough for me and Josie. 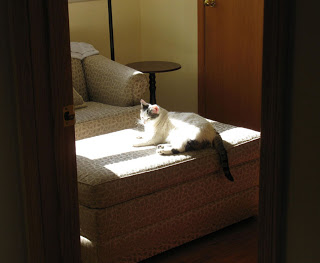