Tucker has still to take medicine. The roly poly one had an infection after his surgery and, though that was cured after a week’s worth of pills, it came back. Evidently, the veterinarian was taking no chances the second time: Tucker was prescribed more than eighty pills, to be taken thrice a day for four weeks.

The medicine certainly worked. The infection cleared up within a few days, and the continued doses of anti-biotic have probably killed every germ Tucker ever had. He’s so clean, I could eat off him. (Those who have cats know that felines are consumed by their humans anyway - one or two hairs at a time.) But I must give him his pills for another week or two, until they run out. 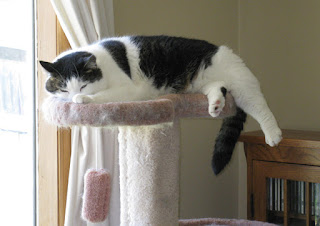 My little sausage of a cat doesn’t like it. He takes the pills relatively easily. Considering the stories I’ve heard and read of some cats and their medicine, Tucker is being very kind to me. I pick him up, sit down with him on my lap, making sure to keep him upright as much as I can so nothing goes down the wrong way. I put the pill in his mouth and follow it immediately with a jet of water from a small syringe, trying to shoot it at an oblique angle so as not to choke him. I then give him three or four more little syringe-fulls of water to make sure the pill has been swallowed. He can be tricky. But in any case, considering his bladder troubles in the recent past, any water that I get into him is all for the good.

But the point is that Tucker does not care for his medicine. He will try to avoid it. He thinks that he is trying hard. Perhaps he believes that he is quite clever about it and cannot for the life of him figure out how I discover his hiding spots. Consider his tactics. One is to hide in the nylon tunnel. If the tunnel suddenly weighs fifteen pounds, I know where he is. I simply tip him out like the last drops from a milk bottle.

Another idea is to run to the bedroom and hide in a corner. His camouflage there proving ineffective, he then leaps on to the bed, flattening himself on the comforter like a flounder. This, to him, is the equivalent of a ghillie suit to a sniper. If he were ever to enlist in the army, however, the first casualty of war would not be truth, but Tucker. 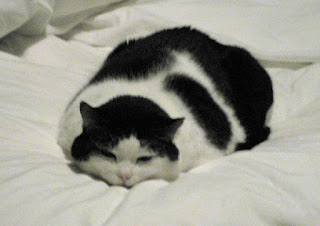 The other day, his complete lack of skill at deception reached a zenith, or perhaps nadir would be more accurate. He heard me preparing the syringe and pill and betook himself to a new refuge, where I would be certain never to find him. He was hidden, he knew, practically invisible to any search. Well, it was at least true that I couldn’t grab him until I’d stopped laughing... 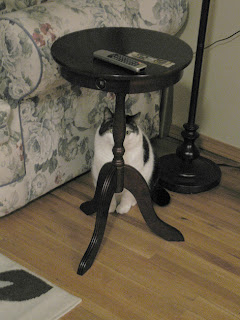