The Christmas tree is up again, and once more, the cats have left it alone. I placed the glass ornaments higher up and the metal bells lower down. This would hardly discourage the cat determined to play with them, of course, but it’s the best precaution that I can take if I still want the tree to be decorated. 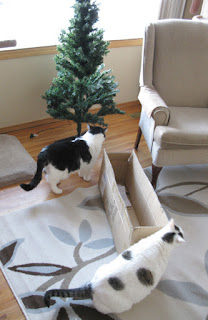 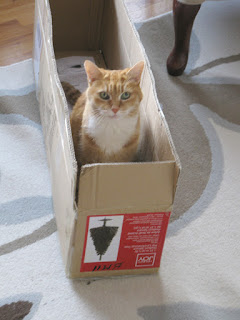 This year, I went once more with the fake tree. I prefer the real sort, but I am inept at stringing lights on, around and through the branches, so I decided last year to buy a small, fake tree with the lights already attached. “Simply add ornaments,” the instructions might read. This season, I saw one location at which small trees, about four feet tall, were being sold with disposable stands attached. The stands were of plastic, with a little basin for water, and were nailed, or otherwise, fixed to the bottom of the trunk. I think that’s a good idea; it solves one of the big problems with getting a real tree to stand straight and with stability. 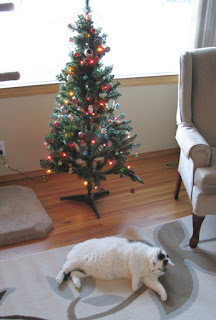 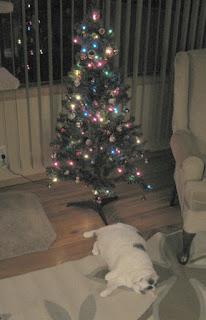 As I put up the tree, the cats seemed more interested in the box it came from than the contents therein, though there was some sniffing. Renn, surprisingly, did not give the new object a moment’s thought. Perhaps such a bland and scentless item did not interst my resident scientist. Tucker likes to ring the bells on the lower branches once in a while, but usually by running under them during a play-session. Otherwise, even he leaves the tree alone. He was the one I was most worried about, though he gave me no trouble last year, either. 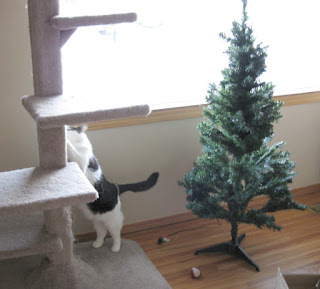 I thought Rachael might cause a problem or two. Though she spends much of her time in the back parlour, I let my guest-cat out to roam the house whenever I can. She too sniffed at the new tree but ignored it thereafter. 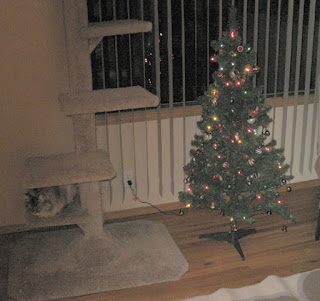 So far, the beasts have given me no worries directly related to Christmas. They are undemanding and usually want nothing more in the way of gifts than an extra-long session of playing and some treats. If only humans were so easy to please at the Yuletide… 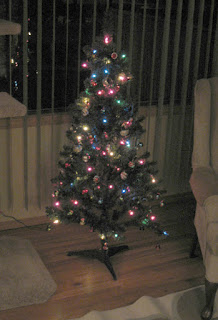