Sometimes, the unlikeliest pairings will emerge in a crowded cat household. Unlikely because of who they contain and when they occur. Josie and Tucker are a good example of this.

For most of the time, they ignore each other. In fact, when Tucker is unnerved by new cats, sensitive animal that he is, he will become hostile in a small way to Josie, growling at her from a distance and hissing when she is near. This has occurred recently with the presence of two foster-cats in my home. That reaction on the part of the roly poly one is now starting to fade. 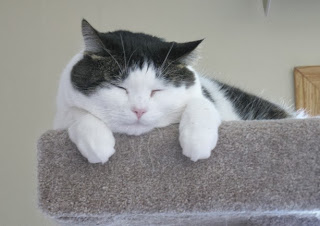 Even when it was strong, however, Tucker and Josie would play. They play for about five minutes each day, and only when I come home from work. I have tried to get pictures of the two of them frolicking - and that is an excellent word for their activities - but have failed so far. I’ve either been too slow (they were done by the time I was ready to record them) or their movements made for blurry pictures. Nonetheless, their shared time together needs to be described. 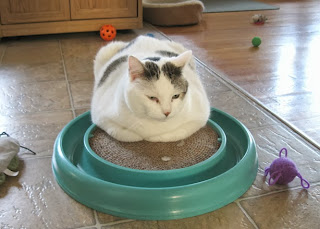 When I come home, I greet all the cats individually, then go to the bedroom to change clothes. Tungsten usually follows me there. Tucker and Josie will then frequently start to play. They chase each other in the sitting room, their weight making it sound as if silken-shod donkeys are banging about the hardwood. Tucker will run away, then turn and charge back, Josie will deftly avoid his attack (all of this is done at a velocity approximating that of a dinner-rush at an assisted-living old-folks home), hurry behind the nylon tunnel and then go on the offensive. 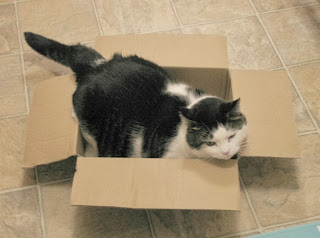 At some point, the rug will be pushed up into a loopy fold, behind which Josie likes to hide. This is the equivalent of a medicine ball being secretly placed behind a bamboo sapling. Nonetheless, she thinks she has cleverly disguised her presence from Tucker who, more often than not, is lying perdu on the other side of the fold, just as convinced of his cunning camouflage. One will break away and pursue or be pursued.

Then, it is over as soon as it began. The roly poly one and my Chubs lie down separately and wait for dinner to be served. Considering their sizes, they may be too fatigued to continue their play. But it’s done now, in any case. 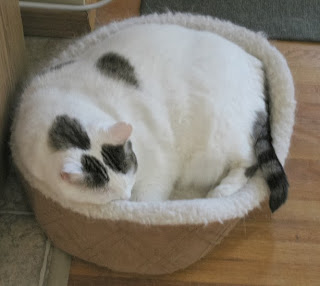 Each cat is careful not to hurt the other during their roughhousing; indeed, they seem to be at pains to avoid touching at all. I watched recently as Tucker leaped over Josie and tumbled on the other side of her, righting himself for an assault, which never took place because Josie ran away, only to gather herself for her own attack. This goes on for minutes, jumping and rolling and running. Why only at this time of day? I have never witnessed it at any other, and never on days on which I stay home.

The whys and wherefores are mysteries known only to the roly poly one and the Great White. The mood must be right, I guess; my return, the anticipation of dinner, the end of a long day; all may contribute. What isn’t a mystery is the fun that those two have with each other, for that small space of time, and the delight I feel at watching them. 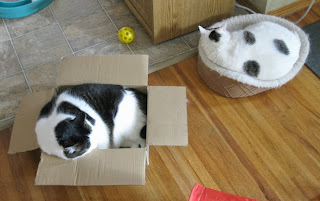