One of the wonderful things about having cats live with me is the moment when I realise that something in their lives or relationships has changes for the better. Tungsten is not a being who needs other animals. She is friends with Renn but they are certainly not inseparable. She will sniff the other perma-cats, but if they all suddenly departed on an excursion up the Amazon River, she would not suffer separation anxiety. The orange one, in fact, does not really care for other cats, and when an unfamiliar one comes to close to her, she will hiss or yowl or both. 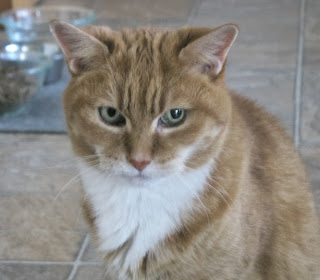 She is a lap-cat, and after dinner, I usually relax for half an hour with a cup of tea and a book. Tungsten will frequently choose to lie on my lap, curled up and snoozing. As the weather turns chilly outside, she does this more often. The other day, however, found Bear-Bear already stretched out in the far corner of the couch. As soon as I sat down, he came over to claim my lap. 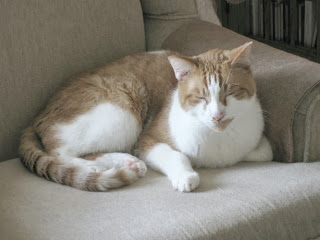 Tungsten, coming up from the basement, appeared miffed at the BB’s presumption. I told Tungsten to jump up anyway. I could tell that she was not entirely averse to the idea, so I kept urging her to join us. I was surprised when she did, and astonished when she not only did not slap the guest-cat away, but actually lie down against him.

Now, one may think that having two cats on one lap would be uncomfortable for me. Frankly, it was, a bit. Bear-Bear is too long to be a good lap-cat, yet he wants to be, so I indulge him every time he wishes. Tungsten, though she did not resent it, had to lie farther out on my legs, so I was forced to hold my knees together to keep her from falling between them to the floor. Yet I enjoyed every second of their presence. 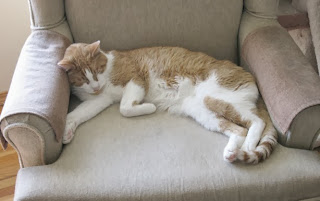 The two orange cats remained on my lap for about twenty minutes. Bear-Bear’s rough purring was continual as he lie perfectly still, his eyes closed. Tungsten was silent, but that just meant she was at ease. I would have been able to determine if she was anxious about the BB being so near; she was not. She had chosen to repose next to him and was fine with it. After about twenty minutes, Bear-Bear rose abruptly, as he will after a period on my lap, and left.

I don’t kid myself that this will be repeated soon. It may, but the next time Tungsten sees Bear-Bear too close, she may throw a fit. But that, I know, will be for show, and will have no substance to it. She has accepted my long foster-cat, and there’s no going back on that. 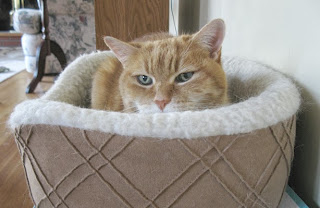