Tungsten has a Drinking Problem

Tungsten has never drunk water from a bowl, while I have been present. She requires me to run a tap for her, if I am home. She will sit on the bathroom basin’s counter and wait. Often, she will cry out for me to come and run the water for her.

This is not as simple as it seems. You see, I believe she does drink from a bowl. I place bowls of water around the house for the beasts’ convenience, including a small one in the basin of the bathroom. That way, if I am not present, Tungsten, getting up near the tap to see if there is any water remaining at the bottom of the basin, will find the bowl there and drink from it. I have come home and found the water level in the bowl reduced from what it was when I left it, reduced to an extent for which I do not believe evaporation could be responsible. Therefore, I think she does drink from a bowl. But only when I am absent.

I have tried to get her to drink from a bowl while I am present. I have tried to wait her out, refusing to run water for her, placing her near a bowl, showing her where water is readily available. I have used fountains and small bowls, large bowls with ice cubes; she will go without water all day rather than drink from a bowl. When I am present. I cannot stand a cat to go without water too long, so I relent, and run a tap for her. I wish she would all the time drink the water from the side of the stream, but sometimes she lets it run off her fuzzy head. Her methods are neither here nor there. 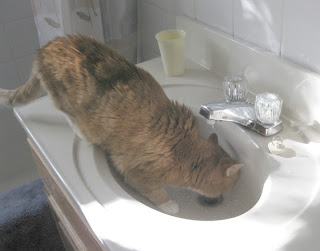 Please understand that running water for my orange one is no hardship, but I would like her to have the convenience of a large supply of fluid in a bowl. From which she does indeed drink. But only when I am absent.

This habit of hers becomes a bit more irksome in the wee hours. You see, she thirsts at night. (A rather good title for a horror film, don’t you think?). Tungsten started waking me at four o’clock in the morning, wanting a drink. This is annoying, yes, but I can usually go back to sleep again and get a bit more rest before I wake for work at six. I could just ignore her, but it’s hard to rest while a tiny voice, becoming increasingly piteous, cries for sustenance with the regularity of a clock’s ticking second hand. Talk about water-torture.

As I mentioned, this is annoying but not greatly so. Times have changed. Tungsten’s has, anyway. She now wakes me at five o’clock. After waiting for her to finish drinking (so I can turn off the tap, and not leave it running), I am conscious enough to need some time to fall asleep again. Knowing I must get up an hour later, my mind fixes on the passing minutes, and I do not, alas, meet Morpheus once more. This is a problem. 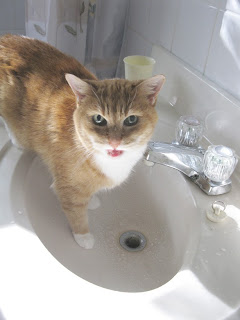 I decided to try a pre-emptive strike against my furry little wake-up call. Because of her previous habit, I still wake about four. I have been returning to sleep soon after, to be woken again at five. Last night, I got up at four o’clock, roused Tungsten from a sound sleep (turn about is fair play) and carried her to the bathroom. She could drink now and let me sleep for the next two hours.

You may have discerned already the flaw in my scheme. The orange one refused to drink. I placed her next the basin and ran the water. She dropped to the floor. The process was repeated, with a similar result. She was not thirsty. I could lead a horse to water, etc… I carried her back to bed, where I could not then regain sleep. I flopped about like a dying turbot, attempting to find rest. The irony is that this morning, Tungsten cried for water at about 5.45, a mere fifteen minutes before I had to get up anyway.

Good friends share everything. Even their drinking problems.
Posted by John Bellen at 10:53 AM