It is called ‘Tackle Fish’, and I suppose it resembles a fish somewhat. Seeing it lying on the floor, though, makes me think of a science fiction movie about little creepy things that attack, perhaps microscopic bacteria grown large. 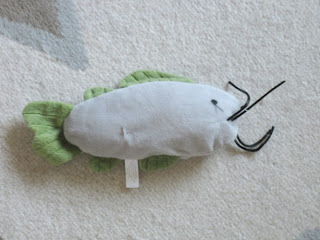 I bought three of them at a bargain store that is going out of business. (By the way, is it just me or is the very fact that there are such companies, as well as pay-day loan shops and soup kitchens, signs that politicians are not making things better?) Anyway, these were packaged with the slogan ‘loaded with potent catnip’. I don’t think they are. The cats have been largely ignoring them, except for Josie.

My Chubs likes them. She will lie on the floor and kick at them, pick them up, bite them and throw them down again. Josie is not an active cat. Even when playing, her position is almost static. But she does play, and it’s good to see her grappling with one of the ‘Tackle Fish’, a rotund, middle-aged cat enjoying herself. 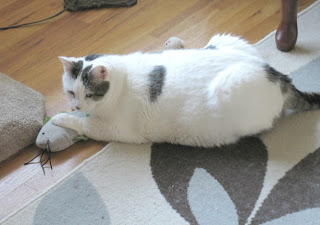 I have dozens of toys that the cats never bother with. I keep buying them. Once in a  while, I’m rewarded with a sight such as Josie provides me while wrestling with the ‘Tackle Fish’. A single successful purchase is worth all the others.
Posted by John Bellen at 10:09 AM