A New Test for Tungsten

Tungsten will need another test. Her blood and urine samples revealed that she was doing adequately but there were some things that may cause worry.

The orange one’s T4 numbers, measuring her thyroid activity, are actually a little low now, after months of medicine to reduce them. Her doctor stated that ten to thirty are normal, while from there to sixty is the “questionable range”. When she first started taking her medicine, Tungsten was at 59. Now she is just below ten. So her next batch of medicine will be in smaller doses, four, instead of five, milligrams. That should result in a bit less lethargy.

Tungsten’s urea levels are at the “top end of normal”, according to the doctor, while her creatine levels are normal. There are, however, “trace amounts of protein” in her urine. This, I am told, may suggest kidney problems. The doctor explained that in many cases, the symptoms of kidney disease do not manifest themselves until fifty to 75 per cent of those organs' functions have been lost. So the Tiny Terror will be going in to provide urine again early next week, to be used in a urine protein/creatine test.

Her weight bothers me. I have started to provide her with California Natural hard-food. The removal of this product from her diet may have caused some loss of poundage, I understand, as it adds a bit of bulk to cats. The other beasts in the household don’t need that: Tungsten does. So, when she asks for it, she gets a little bowl of it. It’s funny how I know when she wants some: she doesn’t say anything, but a look, a stance, sitting in a certain location, will tell me.

I hope these measures will keep my orange one with me for many years to come. 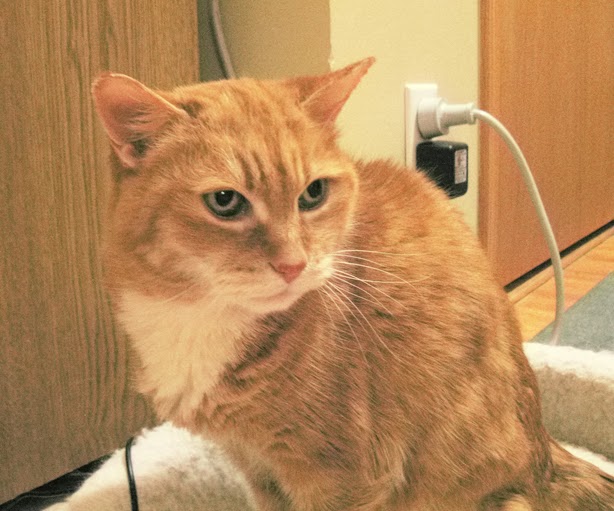