Tucker is home. I was able to retrieve the little sausage this morning. I had to return to work afterward, so I have installed him in the back parlour with a litter-box, food, water and a heated cat-bed. There, he can relax without the other cats smelling hospital smells on him, hissing at him (as some do under those circumstances) and generally bothering him. As well, if he poops on his own (an unlikely desideratum), I will know that what is in the litter-box is his.

My roly poly went through an ordeal. Initially, it was thought that a night with intravenous fluids would suffice to loosen his bowels and bring out the poop. That did not work, so he was subjected to enemas. These were gentle - as such things go - and he felt little discomfort and no pain. But, after three enemas, still nothing came out. So, my poor cat was knocked out with anaesthetic and the poop was massaged and pulled out by hand. It was a long process and, in the end, not entirely successful. About a quarter of what had been in his intestines remains too far up the tract to be retrieved.

So he has come home. I will be giving him high-quality soft-food (though whether he accepts it is another matter) and a drug called cisapride. (Really, I think they’ve run out of drug-names now.) This is a gastroprokinetic agent, and increases the motility in the upper gastrointestinal tract. In other words, it gets the bowels pushing the poop out. I also have lactulose as a laxative, to make things softer and easier to manage. Tucker probably won’t have anything to evacuate for a couple of days, but thereafter I’m hoping for big things from my roly poly.

I would like to thank those who have sent me messages of encouragement and those who have kept my cat in their thoughts. He is a very sensitive fellow; troubles such as these are always aggravated by sensitive natures. If this were Tungsten, she’d be thinking, “Crap’s crap; what the fuss?” Josie, on the other hand, would say, “Hey, look, the litter-box is as wide as an Austin Mini, but my bum’s bigger, so I still missed it. But at least I went.” Tucker needed help. Hopefully, he’ll be able to take the next stage himself.

This picture is an old one, but I won’t be able to get new photographs until the weekend. Just a reminder of how cute the little guy is. 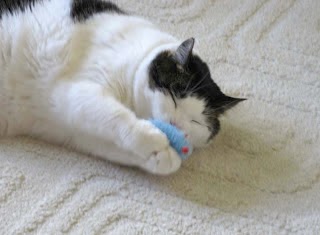