A Tale of a Tail

Cats are very expressive, as we all know, and have a thousand ways of telling us what they are feeling. Despite this, I, at least, am at a loss as to their desires half the time. But I am aware of the slowly whapping tail and what it means. Kola, for instance, loves being petted, having my fingers run firmly down his spine. But when he’s had enough, his floofy tail starts slapping the surface on which he is lying. It’s time for me to stop.

Yet this indication of annoyance is not universal. Cats are individuals and Josie is no exception. She enjoys being fussed over, and receiving chin rubs more than most other attention. She has an interesting tail; I call it a rat-tail because it is so wide at the base and is short, relative to her body. It’s thick and strong. And she whaps it when she is enjoying her attention.

At first I thought I was doing something wrong. But stopping led to unmistakeable protests, while resumption returned the tail to whapping. My Chubs will lie on my lap for quite a while, almost still, and bask in the good feelings of a chin-rub. All the time, her tail is slowly whapping.

Her complaints are more vocal than visual, and why she uses her tail the way she does, I don’t know. If I were less acquainted with her, it would be misleading. It simply goes to show that cats are indeed individuals and, though we can generalise about them, to be fully aware of each, we must learn about each. The same may be written about people.

As an addendum, another interesting thing about Josie’s tail is its pattern and colour. It is ringed, black and what I call ‘tabby grey’, with a black stripe down the length of its top. I recently saw a picture of another cat who had Josie’s body colouring (white with ‘tabby grey’ patches) and a very similar tail. This little beast lived two thousand miles away, so a family resemblance was most unlikely. I wonder if the pattern of tail accompanies the type of body colouring.

Even so, my Chubs is unique, from the tail up. 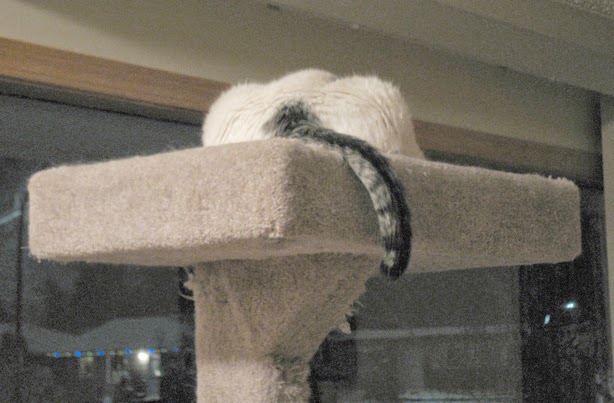