The Trouble with Hair: Cammie and Kola

Having just written about Cammie’s ordeal breaking the bowl, I have to describe another ordeal through which she’s going. I believe that the earlier incident was the start of this one: she seems to have a hairball that won’t come out.

She has been feeling poorly for a few days, and eating less and less. Yesterday, she ate hardly anything at all, and was growing lethargic. Tempting her with different flavours of her preferred soft-food was failing, and she was eating very little hard-food. She had been spitting up clear foam, and then pinkish foam, so, having taken counsel with the rescue-group of which I am a member, it was decided to treat her for a hairball.

I was reluctant to do so. Cammie has just reached the stage at which she will not fight being picked up, as long as she doesn’t remain too long off the floor. Now, I had to pick her up and shoot hairball remedy into her. This is a viscous goop which manufacturers and veterinarians say has a flavour that cats love. Manufacturers and veterinarians are wrong. I treat Renn and Josie regularly with it, and they act as though they are being given their last meal before execution, and the cook ruined the main course.

I ambushed Cammie yesterday by picking her up off the dining room chair where she was squatting and taking her to the bathroom. She was stunned by the swiftness of the action and I was able to use a syringe to put the proper amount of goop into her. This morning, she was ready to fight.

And yet, she did not. The character of this cat astonishes me. She screamed as though I were cutting her in two. She twisted and turned and pulled. But she didn’t scratch or bite. She could have. Her claws need cutting again and I could have been flayed alive. But once again, I got the required amount of goop into her. After which I carried her - still screaming - to the bedroom where she was placed in isolation. I did it yesterday, too, in order to determine if she ate anything. She is alone in there with a litter-box, food and water. I will be able to tell if she takes anything in at one end or gets rid of it from the other.

It may be wishful thinking on my part, but my Siamese princess seemed better this morning than yesterday evening. She was hungrier - though not hungry enough for my liking - and was grooming herself. The day before yesterday, in my first and unsuccessful attempt to give her hairball goop, much of it got on her fur. She was too apathetic to clean it off. This morning, I saw her trying to wash herself. When I left her, she was lying on a cat-tree, and consented to let me stroke her fuzzy head. What a good cat she is. 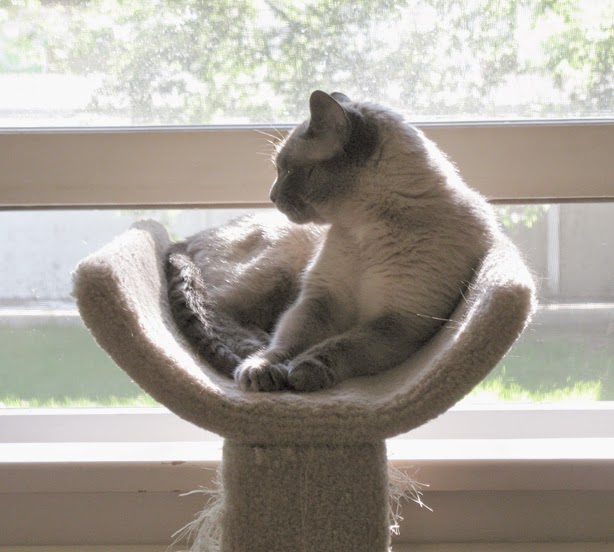 And now, on to Kola…

Kola has been experiencing runny poop. I didn’t know it was his until this morning. He is a very clean animal, especially considering his long, airy fur. But this morning, his bum was matted with…unpleasantness. So it was his turn in the bathroom - right into the tub, actually, where I could use a wet cloth and scissors more freely. He fought me more than had Cammie. A tailed animal has a human at a disadvantage, using it to keep their rears covered. I had to keep Kola down with my elbow, use that arm’s hand to hold up the tail and the other hand to clean. Even then, it was tough going - for both of us. Yet after this, the Floof King lie down on the ottoman in the parlour and purred while I stroked his back. 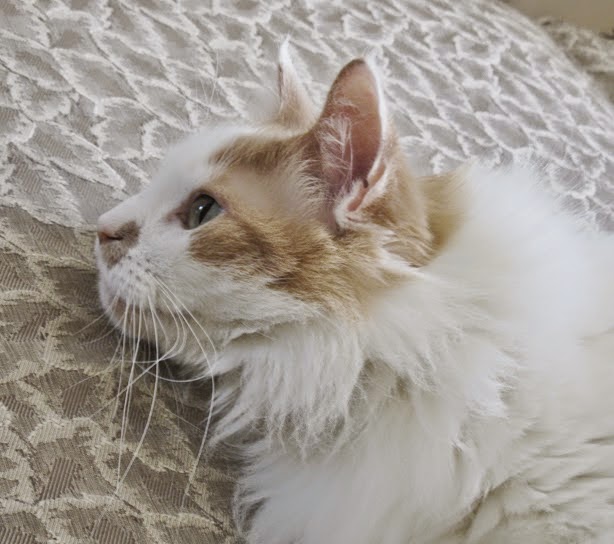 The forbearance of cats is incredible. But then, I’m lucky in having the foster-cats I have.
Posted by John Bellen at 9:03 AM