A New Campaign in Tungsten's War

Tungsten went to her veterinary appointment on Friday. The resulting information from the tests conducted upon her was not good, but not very bad either. My orange friend is in second stage kidney failure, retaining about half of her kidney function. Usually, the doctor told me, cats don’t exhibit signs until they lose three quarters of the organs’ functions, so I was lucky Tungsten showed me clues relatively early on.

This is of course bad news, but it’s not a death sentence. I intend to try some kidney diet on her, though it is anyone’s guess whether she will accept this and, if she does, how long she will continue to accept it. Failing that, I can try some food made for seniors. There are other articles I can use on her, including some pro-biotics and a supplement for binding phosphorus.

The orange one’s big need is for water. I will be setting up more bowls for her. An indication of her desire for more fluids is her apathy in allowing me to see her drink from a bowl - previously, she felt that she had to maintain the fiction that she didn’t drink from bowls; that way, I would feel compelled to provide her with running water from a tap. (She doesn’t know that I’d give her water in any form she likes, so long as she drinks it.) As well, Tungsten doesn’t seem as reluctant to accept water from a syringe sometimes.

Good news did come from the examination, however. Her T4 values, measuring her hyperthyroidism, remain good. The normal range is between ten and sixty. Tungsten was at sixteen and now is at nineteen. 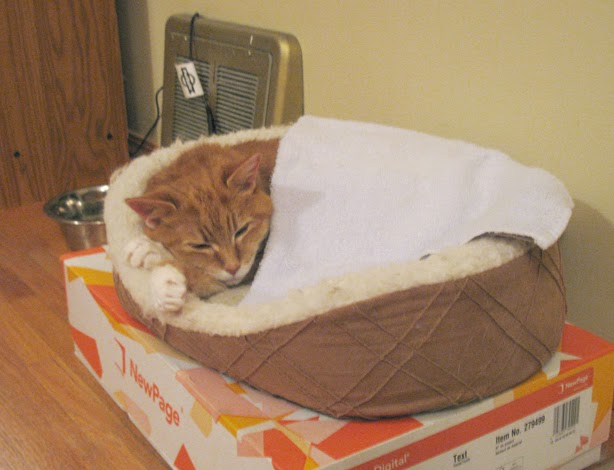 Something a bit frightening occurred the night following the veterinary visit. Tungsten began visiting the litter-boxes, very suddenly and very often; every few seconds, in fact. She would do what she had to do, come out and immediately go back in. She was wetting, small drops each time, so she was not blocked. It was as if an infection had assailed her without preamble, causing her to think she had to go when she hadn’t really. Then it stopped. The episode lasted about an hour and a half.

The next morning, it occurred again. It was of shorter duration, but Tungsten felt such need that she sought other places to go, even though I brought a litter-box up from the basement to the main floor for her convenience. She probably felt that the litter wasn’t helping her, so she would try other locations. This too stopped suddenly.

Finally, it happened a third time on Sunday morning. Tungsten was so needful to go that she tried everywhere, chairs, carpets, hardwood floors, leaving little spots of urine at each. Then that ended, as well. She has since recovered fully, and has not been restless at night as she was during the weekend. She is leaving proper-sized lumps in the litter-boxes.

I called the after-hours veterinarian Friday night and she suggested I bring my friend in the next morning. But Tungsten’s swift recovery that night suggested to me that this was related to stress and not an actual infection. Its repetition the following two days - and its abrupt stop each time - made me more certain that she was beset by stress caused by the doctor’s visit. I took a chance and did not bring her to the hospital. It was risky, I know, but I think I was right. She is doing well now, except that she woke me early today using her new method for getting me out of bed when I don’t want to: roaming the top of my nightstand and knocking items to the floor. I wish there were a diet to deal with that…

So my top-cat enters a new phase of her war against her conditions. I will be getting the food and the supplements, pouring more water into her and making sure she eats. A friend has a cat in a similar condition, a cat who has lived for three years with the same problems, and is now nineteen. Tungsten isn’t yet finished with life; as long as she’s comfortable and content, I want her living a very long time. 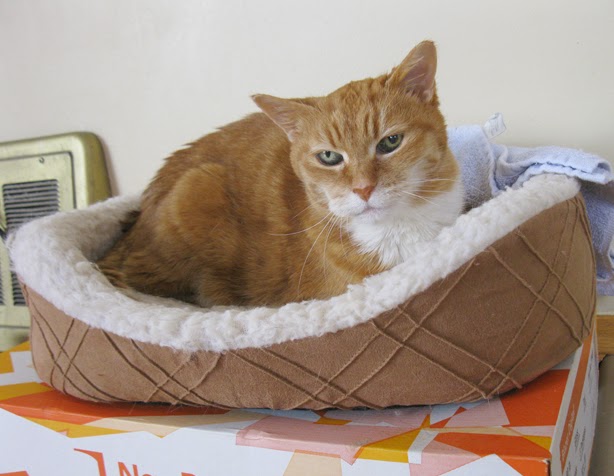