The Body in the Bathtub

Noah continues to provide excitement and entertainment at my house. In fact, he provides a little too much excitement, as far as the perma-cats are concerned. He enjoys following them, sometimes too closely for their comfort. I often hear growls and hisses, and Josie’s peculiar little old-lady whine, if Noah gets too near to them.

But the boy is young and is energetic. He wants to play, he wants to wrestle, he wants to explore. That’s his life right now. Periodically, he does rest. It was very hot this past weekend, and I had a nap on Sunday. Noah trotted in and got up on the bed; after his presence forced my Chubs to go elsewhere (even though I was between them), the boy settled down beside me. He was actually still and quiet for a measurable amount of time.

But he has taken to lying in the bathtub. The air conditioning was on during the weekend (it was that hot), so the temperature in the house was hardly unbearable, even for cats. I don’t think Noah was in the tub for the cool feel of the steel. Even so, he spends time in there, sometimes playing with the stopper or the shower-curtain, sometimes, mercifully, lying motionless on the bottom of the dry tub. But never for long. 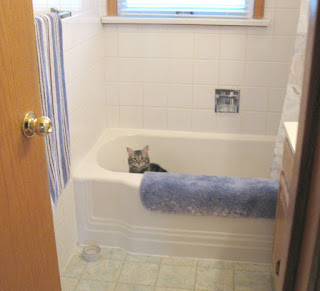 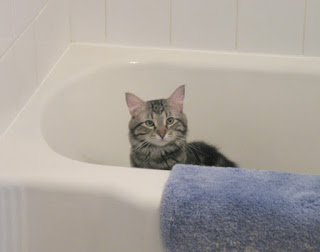