You may have read on here a while back that Noah inadvertently scratched me while I was holding him. He was startled and leaped out of my arms, using my chest as his launch pad, and his claws as, well, claws. I was gashed on my chest and jaw, though not badly, as it turned out.

This week I was moving some furniture in the parlour. I set an electric fan on the ottoman and picked up Noah - who must see from very close range everything that is going on - to carry him out of harm’s way. The furniture I was moving was heavy and I didn’t want him underfoot. The other cats kept their distance; they know the sounds of heavy object movement. Besides, they’ve seen it often enough not to have to witness every instance of it. Noah still likes to observe all.

I took up the boy and was about to put him outside the room when my leg brushed the electric fan. That weighty article fell with a crash to the floor. Noah, startled again, threw his legs into a windmill imitation in an attempt to escape the noise, and my clutches. Cammie, as she always does when there is a clatter, hurried to investigate and/or chastise. I knew enough not just to let Noah fly off of me - he was as likely to land on the princess as not (and that would have resulted in all sorts of trauma), so I held him at arm’s length (something I could not do to all the cats, I know).

It was too late for my skin, however. Two deep scratches had been inflicted, this time on my stomach. They do not constitute serious damage, of course, but they are annoying, and I have holes in another shirt.

Noah is not to blame; he was reacting as his reflexes demanded. They are very good reflexes. I will have to learn to stand still while holding him, I think. Or get better reflexes myself. 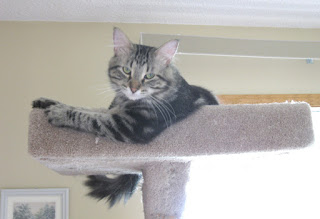