The relationships among the cats in my household always interest me. I’ve written about them before, I’m sure, but they evolve and, with the introduction of a new cat, they can change quickly. Noah has been with me two months now. He has progressed in many ways, and his relationships with the perma-cats have changed. 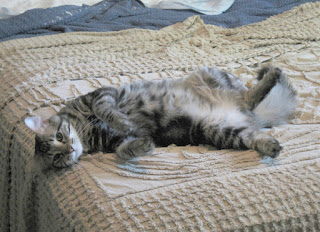 The most interesting aspect of the boy’s stay is how Tucker has come to dominate him. I would never have suspected the roly poly one to have a bit of the tyrant in him. But, following upon his successful browbeating of Kola, my previous foster-cat, Tucker decided that Noah too needed placing in the hierarchy - and that place is beneath Tucker. The latter launched himself at Noah frequently at the beginning, but now does so only periodically, to remind the youngster of the situation. Noah, usually, becomes immediately submissive, and Tucker stalks away, satisfied. 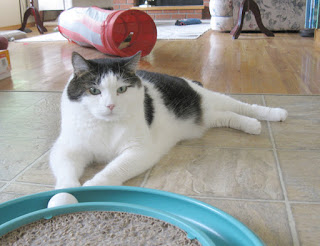 This, however, leads to problems with Renn. My big boy, despite his size and streamlined appearance, is no fighter. Noah, thwarted at being the top mancat of the house - if indeed the thought occurred to him - was nevertheless not going to settle for the bottom rung. He has assaulted Renn several times without provocation, so that Renn growls warily whenever he sees Noah approaching. 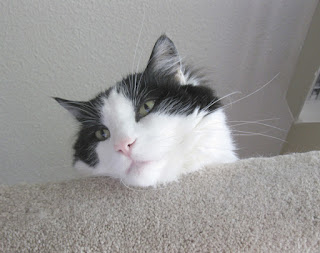 Cammie similarly received unwanted attention from Noah early on. The boy ambushed the princess as she was coming away from the litter-boxes. Since then, Cammie has been on the defensive with regard to Noah, growling more ominously than does Renn, her ears flat back and her demeanour definitely menacing. Noah will avoid her on these occasions. Yet there is a fascination between the two, I can see. It is not the rule that Cammie will not tolerate the boy’s presence. Indeed, she will follow him sometimes, while Noah will lie as close as he dares to her. At these moments, however quiet they may be, I dislike to leave them unwatched. 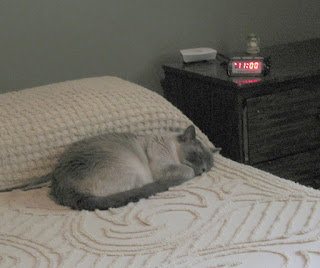 And finally, Josie. My Chubs doesn’t care for Noah, either. She will give her whining growl if the newcomer gets too close, and the two have exchanged blows. But their fights are not like those Noah has had with Tucker. There is little viciousness in them, and Noah seems either intent on getting to know the Great White, or simply annoying her, though this happens regardless, as far as Josie is concerned. 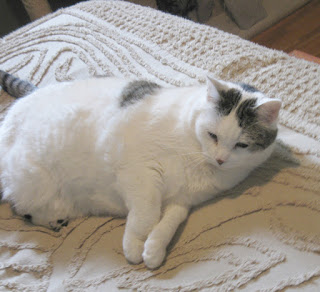 Seeing the interaction among the beasts change with time and circumstances is always intriguing. For as long as my latest foster-cat remains, I think our little feline society will evolve. There may even be less hissing, some day. 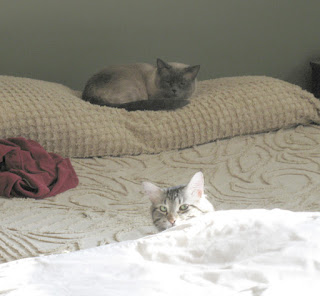 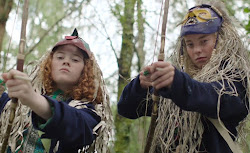