My beasts and I have a number of traditions. They were started years ago by Tungsten and myself, and each cat seems to have his own with me. One of Renn’s is enduring.

When we lived in the house, I initially installed my computer in the spare room downstairs. I thought it a convenient location. I was wrong. It was at the farthest reaches of the house; it was chilly in the winter and, in the summer, when I had the front door open to the screen, I worried about not hearing someone upstairs. Anyway, I needn’t have been concerned about not being found by the cats. At least one of them, my big boy, would journey down to the marches of our little kingdom whenever I was there and spend some time with me.

Then, when I moved the computer up to the back parlour, a much more satisfactory location, Renn moved his visits. In he would come, always when I was there in the evenings, rarely during the day.

Now that we are in the cosy apartment, the computer is in the bedroom. I usually spend a few minutes on it after I shower, a cup of tea on the table and music quietly playing. My big boy comes in, as he has been doing for almost seven years.

He hasn’t changed his approach. The first I know of his presence is his black and white form, silently wiggling to my lower right. His back is arched for attention, his tail straight up. I greet him with his name and pet his head, and he weaves and purrs. He scratches at one of the cat-trees. He retreats, then advances, wobbling and twisting. This goes on for several minutes, and then he is gone.

What determines these little rituals? Is my big boy making sure that I am here and safe? Is it his time for some reassurance? Is he just stopping by to say ‘hello’ before wandering off to study a bowl of water or a patch of rug? I will never know, but I am glad it occurs. My Renn may be a scholar, a scientist with a probing mind; he is also at heart a sentimentalist, a cat who enjoys giving attention and receiving a kind word. Our tradition is a bit silly, really, but I like it. 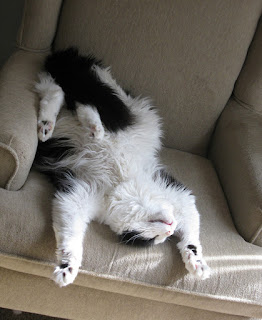