The feline relationships in the apartment don’t remain static. On the other hand, they don’t change to a great degree. But they do change. For example, witness what occurred a couple of days ago.

Josie and Renn were sleeping on the bed. It is not unusual for these two to be on the bed together. They are not friends, but neither do they mind each other. Then, Cammie joined them. I don’t know why. It is unlike her. She may have jumped up because I had been at the computer, and then she remained when I left. Note first, the proximity of the princess and my big boy. 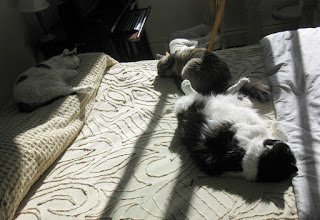 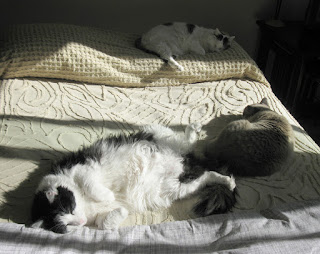 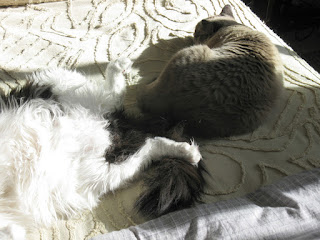 While this is not common, neither is it surprising. Though Cammie will hiss at Renn if he comes too close for her liking, her action is not personal. She simply wants her personal space, which has a wide diameter. Snoozing, she is less demanding. But then, Cammie, of her own volition, rose and moved – closer to Josie. 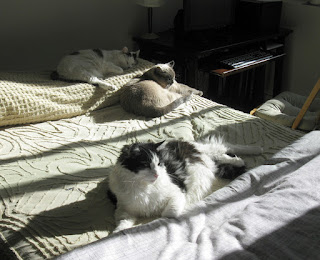 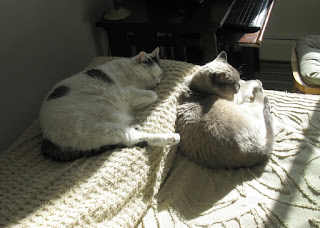 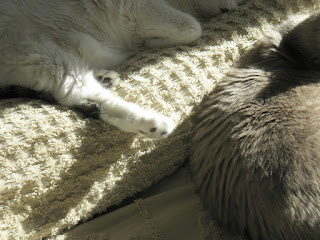 Cammie does not like my Chubs. Their rivalry extends far back into the mists of time, and is kept alive by Josie periodically provoking her sister, just for fun. I have never known Cammie voluntarily to reduce the distance between herself and Josie. You may observe that there was a good deal of shade falling upon her when she was next to Renn, and her move placed her in greater sunshine, but even so, this is unprecedented.

I am not in a state of elation over this. Here, it isn’t a case of two steps forward and one back; it is more akin to 400 steps forward and 399 back, with the result that hardly any progress is seen to be made. The rate of adaptation is not rapid. However, I have consulted with several eminent mathematicians, including the best brains of McGill University and Oxford – well, all right, I think I talked to someone who had been to Montreal, and someone else who liked the Inspector Morse tv series, set in Oxford – and they agreed that, while it will take more than seven hundred years at this rate, Josie and Cammie may very well become friends.