Cleaning Was Just the Beginning


My holidays are the time for chores. Putting the two together may seem incongruous, but my three weeks off are the only period when I have time for large-scale tasks that don’t take up all my available free time. I could spend several hours doing this or doing that on a Saturday, but that would occupy half or more of my day off. If I do them now, they use up the same amount of time, but the proportion remaining is much more consoling.

One of the big tasks of my holidays is cleaning the cat-trees. Out come the rubber gloves and the pail of water; up rises the smell of damp cat. Pounds of cat-hair are removed from cat-tree platforms, giving them an almost pristine appearance. It takes some effort and time but, as a friend told me, it beats using a thousand lint-rollers.

Then come the cats’ reactions. Their smells are gone. Substituted is the odour of bathed feline. Most of the beasts are equanimous about the cleaning. Renn, of course, does a great deal of sniffing – the prerogative of having such a big nose; Josie and Tucker don’t seem to mind; Parker doesn’t care.

Cammie is another matter. One of her favourite spots is the top platform of the taller cat-tree in the sitting room. Well, now something was wrong with it. All the carefully laid out hair was gone. The bits of dried food – she likes to take her dinners there – were missing. Worse than new, it was clean. She refused to use the top platform. She started squatting on the next lowest level, even though that too had been cleaned.

This was a bit worrisome, more so than it might seem, since, as I wrote, Cammie likes to eat her soft-food at the top of this cat-tree. She will eat it elsewhere, but that’s an iffy proposition. The best place to get her to consume the soft-food is where she no longer wished to go.

However, I have not lived with these confounding animals for ten years for nothing. I had earlier bought some cat-nip spray, to use on toys in an effort to interest the beasts in the more neglected items. The effects of this attempt were ephemeral. But they had an initial allure, so I sprayed a very small amount on the top level of the high cat-tree, while Cammie lurked grumpily immediately below.

It worked. Cammie has returned to the highest platform, and has resumed eating there. She doesn’t stay there as long as she used to, and has chosen other spots in which to lie. But she is no longer suspicious of her formerly favourite location. Her times there may increase as the cleanliness of the surfaces erodes. 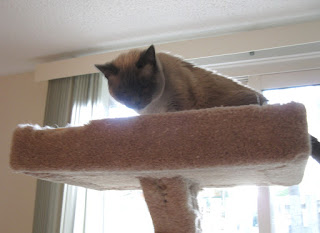 The irony of this situation (there is usually irony with cats) is that one of the alternate locations the princess has chosen to reside is the cylinder-house cat-tree. She has resumed curling up in there after months of ignoring it. The irony is that the interior of the cylinder took me longer, and received more attention, than any other portion of any other cat-tree. But Cammie was the first to jump into it after its washing, and was apparently untroubled by any change in smell.

Did I mention that these animals were confounding? 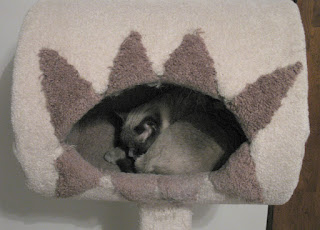