Most people who have pets talk to them. I think that is a true genralisation. Not everyone talks to them as if they were human, or could understand all that was being said to them, but most talk to them. I certainly do.

Moreover, I tell my cats things that they surely don’t understand. I tell them as I leave the apartment when I believe I will return. They don’t comprehend hours or minutes. They may know limited amounts, like the rabbits in Watership Down, who can count up to four; anything more than that is ‘many’ or, as rendered in the book, ‘a thousand’. My cats comprehend commands such as ‘get down’ and ‘no’; whether they obey them is irrelevant, at least to this topic.

Cats and dogs are able to learn a great many words and phrases, and sometimes we speak a certain way to make it easier for them, or so we think. An example of this in my household is the word ‘water’. All the beasts know it, and would know it if it were pronounced properly. For some reason, however, years ago, when I first met Tungsten, I started pronouncing it ‘wat-ter’, as if it were two words, with a stronger accent on neither part. Tungsten would of course have quickly caught on to the correct pronunciation, if she hadn’t known it already. But I called it ‘wat-ter’, and so it has remained. I fill bowls with ‘wat-ter’, I wash dishes in ‘wat-ter’ and I bathe in hot ‘wat-ter’. 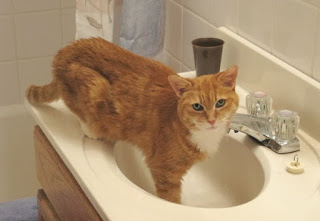 The way we speak to our pets often becomes a part of our character. It is embarrassing therefore when we use the same phrases or words to humans as we do to animals. I usually catch myself before I ask if another person wants some ‘wat-ter’, but not always. I then pretend to have had a catch in the throat in the midst of the word. Sometimes, if it happens with another pet-owner, I explain and he or she nods. They understand ‘wat-ter’ as well as my cats do.

It may pay etymologists to create a field of their discipline devoted to the adaptation of English – and other languages – as applied to pets. It may be a dry, difficult study, though, so a prepared scholar will be ready to refresh himself with a tall, cool glass of ‘wat-ter’. 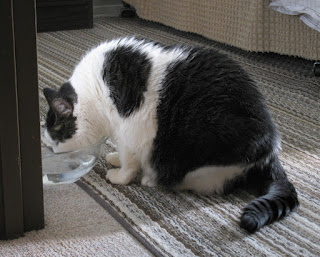