Renn came home late this afternoon, and is recovering well. To observe him, he is back to normal, but that can be deceptive, so I am staying cautious with him.

He had two teeth removed. An x-ray showed that the roots of one were hardly enough to hold on to it, and its opposite number on the other side of the mouth was in the same condition. Aside from those extractions, he had a thorough cleaning. It was almost double the cost of Cammie’s dental procedure, though she kept all of her teeth.

Renn is tremendously hungry. It occurred to me that my big boy has not had surgery while he’s been with me; not had anything that required him to fast. When he came home, he had not eaten for eighteen hours. That really isn’t much for us, but Renn eats so little that missing a nibble here and there must be similar to starvation.

He is forbidden hard-food for a couple of days. I was told to ‘soften’ his food. To soften hard-food means to soak it until it is a sludge that no cat would recognize, and most would not consume. Fortunately, Renn does eat soft-food. I fed him a small amount of it a couple of hours after his return. Then, at snack-time, two hours later, I gave him more. He sucked it back like a black hole swallows space-ships in a science fiction movie. I probably gave him too much, but that was several hours ago, and it has stayed down. I will give him some more food to before bed-time.

Right now, he has come to see me at the computer, as he frequently does. He is purring and gave me a head-bump. A good night’s sleep in his home, and increasing amounts of food will heal a great deal. I was provided with three doses of Metacam to dull pain, one dose to be given a day. I’ve never given the big boy anything by syringe. This should be interesting.

I want to thank everyone for keeping my big boy in their thoughts, and for their good wishes. Renn is home and, now that those two teeth are gone, he is in very good health. He is happy, and I am happy. The long day ends well. 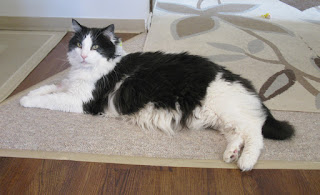