The cat who started Operation Slim Pickens has at last been trapped.

I wasn’t going to set the traps this Sunday. No one was working at my job-site today, so no one would be present to check the traps. I would have had to ride out several times in the evening myself. It is true that, by bicycle, my work-place is only six or seven minutes away. But it was not something I wanted to do on a gloomy, cold, last day of September.

Time, however, was ebbing. The cold that made me reluctant to venture forth actually spurred me on. Fewer cats come out less often from whatever warmth they have found as the dark months succeed the light, so being able to trap them becomes more difficult. As well, trapping on chilly nights brings more discomfort to captured cats waiting for recovery. So I set the traps.

I used a new weapon tonight. Reinforced by the Colonel himself, I placed small pieces of Kentucky Fried Chicken as bait; I had just heated them in the micro-wave oven before placing them in the cages. The scene set, I retreated.

I was not hopeful, though: as I departed, I saw that the only two cats present were a long-haired white cat with a floofy black tail – who had been spayed in a previous operation – and Bijou, neutered last week. I assumed that I would be releasing one or both of these hungry creatures when I returned.

Not fifteen minutes later, I received a call from a colleague, the man who feeds the feral colony. Not having been apprised of my operation this evening, he had come to disburse his food. I figured he was about to tell me that I had caught a cat who already had been fixed. Instead, he delighted me by announcing that the little mother-cat we had initially tried to capture was finally in our grasp.

Beulah is currently in my apartment, very quiet in her cage, covered with a blanket. She is uninterested in food, unsurprisingly, and, due to her impending surgery, has run out of time to eat. I will give her water through the night and, in the morning, take her to her rendezvous with sterility.

We were very fortunate to find homes for all of Beulah’s kittens. I don’t know if she had had any previous litters, but I doubt we would have been so fortunate in placing any more she may have birthed. That eventuality is no longer. She was a wonderful mother, attentive, loving, patient and careful. Her reward, whether she knows it or not, is that all of her kittens have homes, and she will never have to worry about any more.

At long last, Beulah has been captured. 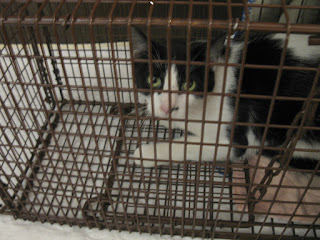