Raleigh is learning about his new home. He is adjusting to its sights and sounds, smells and routines. He has not been consistent in his actions and reactions. One day, he comes out to await his dinner with the others, and precedes me with his rusty-hinge squeaks and creaks, while I bring his food-bowl to where he eats. The next, he has to be coaxed out, slowly, from behind the couch in the library. One day, he hides, from morning until evening, and then through the night; the next, he is almost out-going.

He also is tremendously startled by ordinary things I may do, even those that have not troubled him previously. I try not to move abruptly near him, and give him warning when I am about to touch him.

Raleigh lived roughly in the outside world, on the edge of a feral colony, trying to survive. That is not a situation a cat easily leaves behind. He has fewer problems with the other beasts than he has with me, but that makes sense, considering his recent past.

His FIV may also have a role in this. That terrible condition is like an open door that lets in any draught of cold air, any dust and dirt, any stranger. Perhaps this peachy-hued fellow will feel good one day and not the next, with no external evidence. I must take this into account in all I do with Raleigh.

His mouth, with its stomatitis, is also a problem, and may, right now, loom larger than his FIV. I know his mouth hurts him in certain situations. He grooms himself, but not very effectively. Fortunately, he loves his soft-food, so eating gives him no trouble, so far as I can determine. He even crunches on some hard-food now and then. He goes to the hospital for his dental surgery next Tuesday. I will watch him when he comes home, and give him the time and space to recover. It is well that the others don’t much concern themselves with him, and will likewise leave him be.

Raleigh can lead a normal life; just today, I saw, for the first time, my new boy playing by himself. He was attacking a fuzzy mouse that was behind a bookcase. It did not last long, but it was a start. My goal is to make the cosy apartment a welcoming place for him, so that he will prefer it to the dubious freedom of the outside. I know he enjoys the kindnesses of an affectionate human; he may not want them all the time, but I believe he appreciates their availability, and probably missed them deeply while living outside. I will try to make sure he doesn’t lack for them again – except when he wants to. 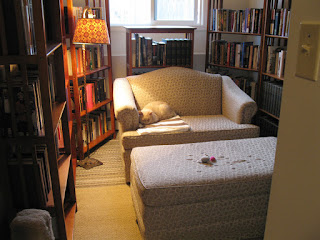