Parker’s condition has improved. Whatever everyone was thinking for him evidently worked. I am grateful.

My orange boy actually began doing better the day I wrote the previous entry, describing his under-the-weatherness. I came home to find him playful and active (most of the cats engage in running about, even chasing each other, when I return from work). For dinner, he was eager to eat and finished off half a large tin of Merrick beef. He wanted more, but I was reluctant to push his luck. I had visions of him throwing it up again, due to overly swift consumption. But he ate another quarter-tin at snack-time, several hours later.

Parker did as well today. His enthusiasm for his food is a little less (more normal, in fact), but his appetite is good. I’m not sure what caused the reversal, any more than I know what caused his earlier feelings. When I came home Monday, I noticed a tiny hairball on the floor, but it was nowhere near the size Parker would have produced, nor his colour. I can’t imagine that that had anything to do with the sturdy boy’s better health.

I will, nonetheless, be dosing him with hairball remedy. I had done so Sunday night and, though it may be a coincidence that he was patently happier the next day – his earlier yellow bile was unlikely a sign of a hairball – it may be that some other reaction to the hairball remedy is responsible. I will try a regular application of slippery elm, too.

I have lived long enough with cats to know that nothing is guaranteed: today’s high spirits may drop to nothing tomorrow, and vice versa. I will continue to watch for signs, and be pleased that Parker is doing well again. In the meantime, I give you images of Puck so intent on looking out the window this weekend that he didn’t realise his tail could have been in the water… 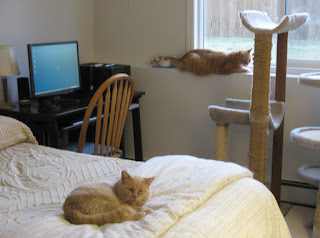 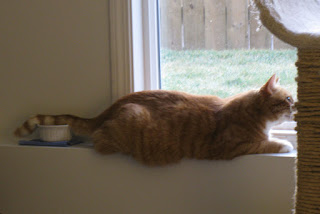 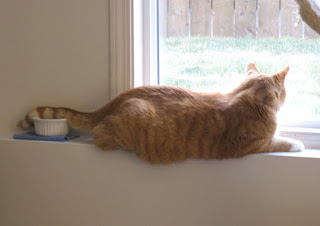 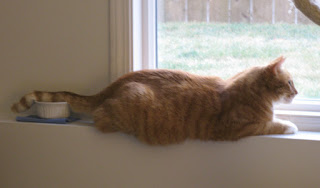