While I am trying to give the other cats their due – Josie and Renn seemed sentenced to obscurity by their good health – some of the beasts continue to intrude into my blog by virtue of their cuteness.

Raleigh is battling a cold right now. He is of course susceptible to illness because of his FIV. As well, he is being given Prednisolone, which, I believe, further depresses immunity. Peachy is currently blowing bubbles with his nose, and his left eye, the goopy running of which diminished considerably in recent weeks, has begun extruding again. I am not too worried, as colds will probably often assault someone in his condition. I will nevertheless keep watch on his symptoms. 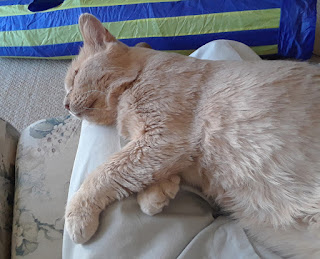 But something else I noticed was his over-bite. Look at that adorable little face. He’s like a little boy perpetually biting his lip, hoping he will be liked. Well, he must have found an appreciative place to stay while awaiting his permanent home: he fell asleep on my lap, and I couldn’t move to chase Parker off the kitchen counter when the latter took advantage of my indisposition to look there for food. I couldn’t even yell at the orange-boy, for fear of waking Raleigh. 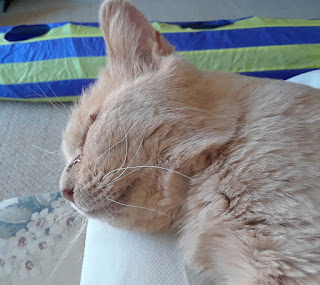 You don’t think they planned that, do you?

Well, anyway, look at that face… 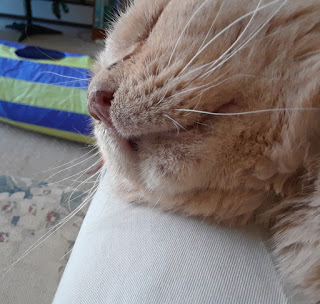