It was twenty months ago that the Hotel Cosy opened for business, ready to provide warmth and shelter to any cat who felt the need or desire for one or the other, or both. In all that time, it has been empty. The management was almost in despair over the preference of cats for other accommodation. However, that has changed, and someone has determined that a room at the hotel is rather pleasant, after all.

The ironic thing about our guest is that it is Finn (a.k.a. Hugo), a very friendly feline who has a permanent home elsewhere. Finn has been frequenting the Cosy Café, where he enjoys a meal on the house now and then, as well as indulging his fondness for having his long fur stroked and his head vigorously rubbed. He evidently saw the hotel’s straw, invitingly untouched by other guests, and thought that the clean, albeit rather aged, bedding looked quite comfy. 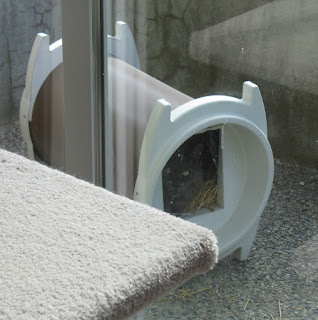 The illustrations show not the first time he has rested in the hotel, nor, possibly the second. I startled him out of his accommodation one evening, and, previous to that, I had noticed that the straw had appeared flattened, though I dismissed the notion that it was actually due to a snoozing guest. But my decision may have been too quick in that instance. 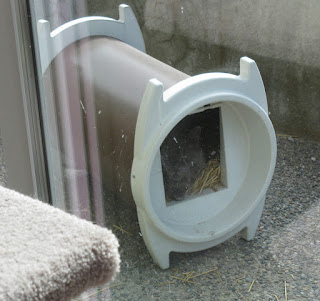 I was going to change the straw – I have a small, spare bale – but now I won’t do anything that may disturb Finn’s choice of rooms. It is true that, having a permanent home, the Hotel Cosy is little more than the gentleman’s pied-a-terre. But it is being used and, apparently, enjoyed, so the management will not quibble over the frequency or duration of a guest’s stay. Besides, Finn may give our establishment the feline recommendation that it needs to become even more popular. 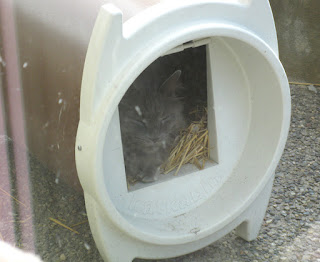