Sometimes, I think Raleigh has a split personality. At times, he is timid but brave enough to come to me and receive pets. It is always the similarly: he begins with talking, saying what sounds like the same thing repeatedly. He approaches me, I hold out my hand in a fist and he slowly, very cautiously, slips under it. He may hasten away even then, but usually, he will let me slide my hand along his back, after which he will come closer and I can pet and stroke him more, even lifting him a little (to get him accustomed to being picked up without cringing or flinching, and if I can manage to put two hands upon him without frightening him.)

Almost always, moments like this come when he is hungry, and he knows food is in the offing: when I first wake in the mornings and when I return from work in the afternoons. If he is feeling up to eating in the evenings, the scene will be repeated then.

Other times, Raleigh is just plain scared of me, hurrying away if I come within a certain distance (the length of which is known only to him.) If he is lying down at such a moment, he will get up and run away. It is as if he had never allowed me to come close at any other time, or as if I were a stranger to him.

This may be the way he will always be. Despite his continuing affliction with stomatitis, I believe he is in better shape than he was when he came to live with me a year ago. His nose is no longer crusty half the time, his eye runs only under great stress (for example, when forced to visit the veterinary hospital), he receives his fill at every meal and he enjoys the warmth and comfort of cat-beds and armchairs. He is protected from the dangers of the outdoors. If he never again ventures onto my lap, I will have to live with that. If he is always wary of my presence, so be it. Animal-rescue is not about the human, but about the animal. If Dr Raleigh enjoys a head-rub while Mr Peach scurries away from my touch, that is how it must be, as long as both of them are content. 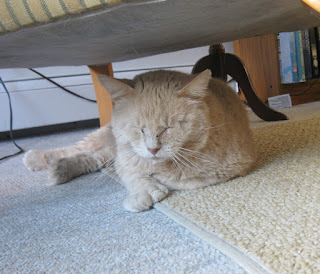