I have been thinking of bringing in another foster-cat since Jessel’s time with me. The perma-cats have been complaisant, and it was time to confuse their world. Besides, another rescued cat ready for adoption isn’t a bad thing for a rescue-group. I had not, however, expected kittens. Meet Oleo (grey) and Bisto (black). 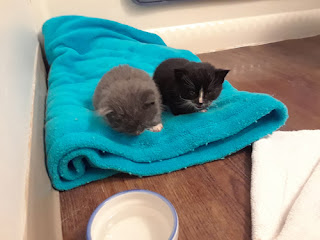 They were found, I was told, in a car engine, after the person who discovered them had driven some distance. I wonder about that, since they are about three weeks old and I can’t see them climbing into a car’s engine on their own. But there was no chance of re-uniting them with their mother, and the rescue-group to which I belong was called. They arrived at the Cosy Apartment at one o’clock. 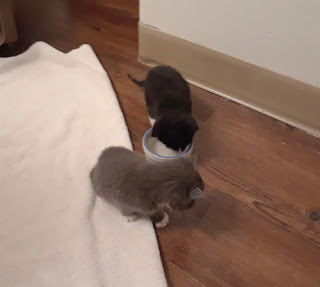 I have no idea of their gender, but they seem in good health. They are active and, though they did not seem hungry when I took them in, they ate well when provided with food. I tried syringe-feeding kitten milk replacement at first. Both sucked it back eagerly. But I wanted to test their progress with eating on their own. They can. However, I will supplement this with the syringe if I feel it necessary. 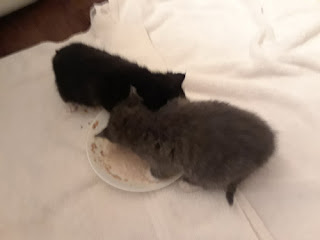 I was informed that they have wet and pooped on their own, though they are not trained for litter. The woman who gave them to us did not have cats and wasn’t about to keep these, so they were using newspapers. That was good enough to start with, but I will be keeping an eye on their waste-management. 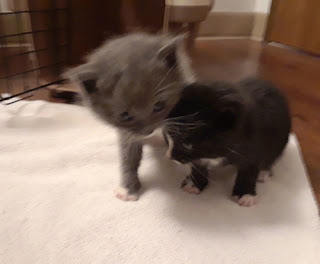 There is much to do. I have to maintain a steady supply of food for them, wash their faces – and the rest of them (I will use a cloth wet with warm water, then dry them) – arrange a very low-lipped litter-pan, spend time with them and watch everything they do. For bed-time, I think a snug, towel-floored carrier, with its door kept open, will suffice. 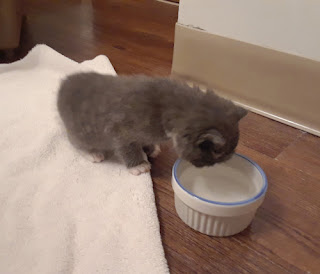 Oleo and Bisto will be in my bathroom for another week and a half, until I know they won’t bring anything into the household. I wash my hands after touching them, and make sure I am covered with a towel when I put them on my lap. This may be over-cautious, but no one ever adopted ‘better to be reckless and sorry’ as a motto. Not having had such young kittens to care for priorly (the partial day I held newborn Adah in my hands not really counting), I am concerned over everything. They are eating too much, they aren’t eating enough; they are too noisy, they are too quite; why aren’t they moving? Did I poison them, did I push the syringe too far into their mouths? Oleo and Bisto are why I have old cats. 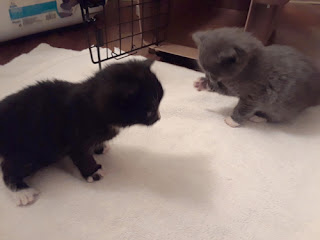 Though I have had them for only a few hours, they appear typical kittens. They have already purred; they evidently enjoy being stroked down their backs. Toys will be introduced and, eventually, the babies will be moved to the library. After that, comes the introduction to my beasts. They will, of course, be available for adoption some day, perhaps in a couple of months, after they have aged me several years…