As readers of this blog know, Neville is my foster-cat. He is, therefore, available for adoption. As they may also know, he is diabetic, and classed by many as ‘special needs’; this limits his availability, though, in fact, diabetes in a cat, once managed, doesn’t require a great deal of work or money.

But Neville has another quality that may affect a potential adopter’s decision: he is not usually a cuddler. It’s not his way.

Many people want a cat who enjoys physical closeness: a lap-cat, or one who likes to snuggle next to the person. I understand that. It’s not only a delight for the human, it signals in a positive and concrete manner the affection the cat has for his person. The Nevsky doesn’t always do this. Like every cat, my former Thin Man prefers things on his own terms, doing them when and where he wants. Many cats want to be close to a person all the time; Nev does not. 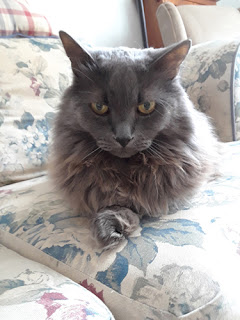 Yet there are times when he will demonstrate that he likes me. Yesterday, for instance, I rested on the couch in the sitting room and, looking at Neville on the cat-tree by the window, patted my lap, more in hope than in anticipation. He jumped down and came over. Leaping up on the couch, he hesitantly settled on my lap. I started stroking him under the chin, which is his favourite manner of petting.

For about twenty minutes, Nev lie almost still, pushing his head forward to receive the most from my attention. I moved to one side of his face, then to the other, then back to his chin. He was silent, but I could feel the purrs vibrating in his throat. At the end of the period, he got off my lap and lie down at the other end of the couch. He was done.

This doesn’t happen every day, or even every second day. But I crouch next to him as he snoozes on the carpet and stroke his back. Or I stand beside him while he reposes on a cat tree and comb his long hair. Most of the time, this results in a low, throaty purr, slow to begin and rough to hear, but definite nonetheless.

Some cats are like that, just as some people are. There may be no word of encouragement or even warmth for a long while. Then a gift is set beside one’s chair, the action itself done without a word. That’s Neville’s way. There is nothing wrong with it, or with him. He may be quite different with another human. But a reminder that you care for him will result in a reminder that he cares for you. It may be rarely given; it may be of short duration, but, like the gift presented without a word, it is real.

That is Neville’s way. 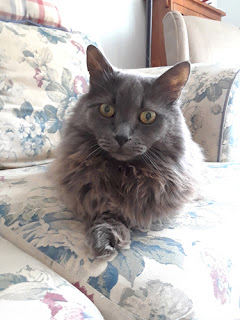