Tucker is still suffering through his cold. He is eating, but not much; his air-ways are very congested. I hope to see improvement over the weekend. It is very worrisome.

But it was Neville who went to see the doctor today. He has been throwing up, and his appetite has fallen dramatically. Tests were run, though there was not enough urine in his bladder to provide for that test. Those that were conducted gave some cause for concern.

I won’t record all the details – partly because I don’t understand them myself – but the doctor is worried about the Nevsky’s liver. Readings of enzymes from that organ show extreme numbers, where there should be much more moderate amounts. It may be a case of pancreatitis, as the pancreas and its ducts are in very close proximity to the liver and its ancillary parts, as well as the intestines; all of these organs can be related when it comes to illness or damage. The doctor wants to run more tests, including one on Nev’s urine, and she wants to take an x-ray.

These actions will occur next week. Tomorrow, I will be receiving medicine for my suffering foster-cat: two kinds of anti-biotic and Cerenia. All will come in liquid form. Some Mirtazapine was prescribed today, to encourage the appetite, but it came in pill form. Though the single pill was already broken into quarters, I will leave to your imagination how well it went when I gave it to Neville.

In the meantime, the battle will be to find something Nev will eat. After no more than nibbling at various foods that he formerly enjoyed, he consumed a small but satisfactory amount of Z/D hard-food. I believe it is far from the best thing for a cat, but when he will eat nothing else, the distinction between good and bad nutrition becomes immaterial.

I hope I haven’t used up all my readers’ kind thoughts when Tucker became sick, because I think Neville will now need them even more. 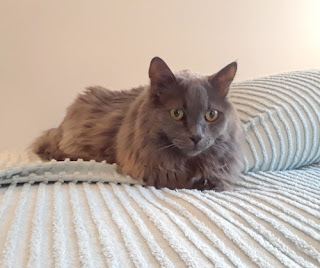