Luther: a Missed Chance and a New Adventure

Luther remains in my foster-care. He has had people interested in him and, in fact, went to a house just this past Friday to see how he would do with a family’s current cat. He came back on Saturday.

Things did not go well. Luther has a thing about other cats. He attacks them. There is no growling or hissing on his part. There appears to be no malice. He simply launches himself at them. It’s not playing; it’s a fur-tearing, screaming battle. Fortunately, no one has been hurt. Well, I have, but I mean no cat, which is the important thing. I don’t know what it is about my orange guest-cat that makes him want to assault every member of his species, but it limits his possibilities for a permanent home.

Don’t misunderstand; Luther is a wonderful, friendly, entertaining, warm, little creature - to humans. The people who wanted to give him a home loved him. They gave him a second chance after his first attack on their perma-cat. Luther blew that chance, too. But it shows how much they think of him that these good people are going to talk to others about Luther in the hopes of finding him a home. Everyone who meets Luther loves him. Another woman was seriously contemplating adopting Luther, but she has a cat whom Luther would not tolerate.

The trouble with this situation is that finding a cat-person who doesn’t have a cat is, as may be imagined, difficult. Someone wanting to adopt a cat usually has one or two or three or more. This recent episode has shown that Luther needs to be the only cat in his household. Once he is, his life will be easy and his humans will have a pet so much fun, they can cancel the cable television. But someone who wants a cat and doesn’t have one is a rarity.

We’ll keep trying, though, and until he finds his destiny, Luther will stay with me. His life is somewhat restricted at my residence, but it’s warm and safe, with plenty of food, fresh water, a comfortable place to sleep and company - from me, not my cats. Somewhere there is a place for him. It’s just a matter of finding it.

Since I wrote the above paragraphs, there has been a development: a good turn of events, though not the best. Luther is not being adopted, but he is going to a new foster-home. Though I, as much as the rescue group who is sponsoring him, dislike shifting cats about, even from one temporary residence to another, Luther will have a better life in this different abode. He will be an only cat! He will have the run of the house, which means the freedom of as many rooms and windows as there are, not just one room for a whole day. And because of that, his new foster-guardian will be able to give him a great deal more time and attention than I have been able to do. I will miss the orange exuberance of the little fellow; he grows on a person very quickly. But this will be better for him.

And, just in case I become lonely with only the four perma-cats for company, another foster will be coming to visit. The PAW Society, with which I volunteer, has had five returned cats - felines given up by their families after years, for various reasons; one person even called it ‘downsizing’ their pet population. In any case, foster-homes are in short supply, so I will be receiving the oddly spelled Rachael in return for Luther. The orange boy goes to his new place on Saturday. I wish him well, but I know he will prosper in his new, wider spaces. 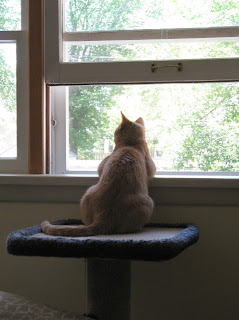