Tucker made his latest visit to the veterinary this week. He was declared to be well on his way to recovery. The results of the surgery are healing very nicely; the doctor seemed surprised at how well things were going. There is a little raw patch near his injured area, but when I ventured the opinion that it was caused by the edge of the cone rubbing against Tucker’s skin when he tried to lick the region, she agreed with me, and considered it to be nothing to worry about. Indeed, in the last few days, it has not become worse. Tucker is not licking his wounds much at all, and hair is growing back. 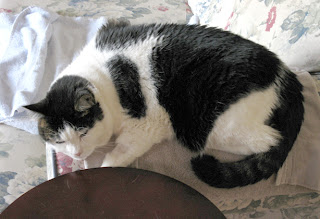 This is quite a victory for my roly poly. This is a cat who spent several days in hiding when he first came to me, and had to be force-fed for a week, because of the emotional effect of the change. When he had dental surgery, the trauma to his nerves was so great, he licked himself raw under the tail. Now, though the veterinary visits were a great strain on him, he has, mentally and emotionally, vanquished his fears. That’s not to say that he did not have them. On what I hope will be the final medical visit for him for a long time, he wet in the carrier, such was his anxiety. But once home, the cone came off and he was able to clean himself as he hasn’t done in a fortnight. 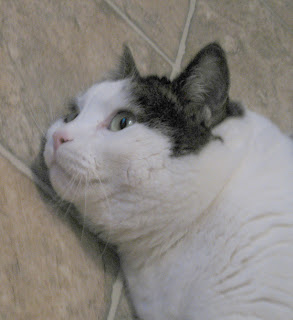 Now he is more active than ever, literally. Even long before he was afflicted with his urinary troubles, he was not as mobile as he is now when playing. He had been quite agile for a tubby little sausage, but over the last couple of months, he slowed down. I thought it was boredom with the toys we were using, but now that I think of it, I realise that he may have been troubled by urinary blockage for some time, and it only recently became a crisis. After all, when one has a full bladder most of the time, the joy of running and jumping palls somewhat. But now he rushes about chasing a piece of string (of all the toys I have for the beasts, he likes this simple one the best right now), throwing himself along the carpet (front end down, rear end up) and leaping over and zooming through the nylon tunnel. He has been given a new lease on life. 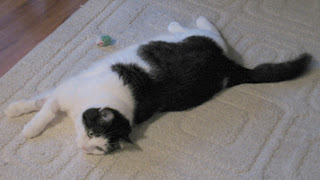 The total monetary cost of Tucker’s revitalisation was high, just over $3,000. But it prevented a higher cost: my cat’s death. It has ensured that such a problem as he had, and to which he was prone - increasingly so with age - would not recur. He acts like a youngster now. He’s without pain and he’s happy. I consider the money well spent. I have learned to watch my cats even more closely for signs of trouble, and I am gratified that I listened to Tucker when he told me of his distress. 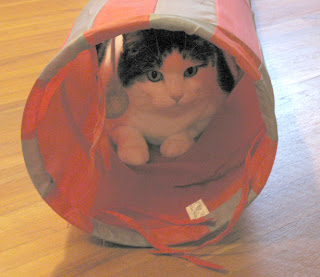 He has continued to wet on the carpet downstairs, but in smaller amounts. I will deal with that. It’s an emotional problem that will, I feel sure, disappear with time and effort. It’s a leftover of his physical troubles and, compared to them, is a minuscule affair in our lives. Tucker will triumph over that too, eventually, as he has over other things. And if he stumbles a little, I’ll be there to catch him.

UPDATE: I didn’t think I’d have to catch him so soon. He had a bit of a relapse today. I realised that he was under the weather this morning when he didn’t purr at all. He was leaking blood in his urine, so I took him to the hospital again. He hated that, so I did, too. He has an infection, so he is back on the medicine he was given immediately after his surgery. It’s the weekend, so I wanted to have him seen to before everything closed for Saturday. The veterinarian is confident that the problem will be cleared up soon. I hope so, because my roly poly has been through enough, and I want him purring again. 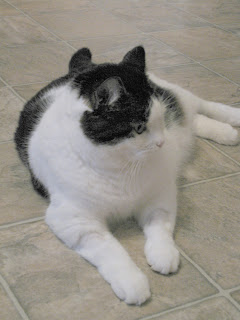