Tucker Returns, Minus a Bit

Tucker is back from the hospital, and he appears to be doing well.

He had a tough week. He first went to hospital because of a urinary blockage. This was cleared, and he came home. He blocked again the next day. It was tough to see the little sausage of a cat trying to lick his rear end where he was feeling so much pain, and to hear him cry out. He was not doing well. I took him back to the veterinarians, and they unblocked his urethra. It blocked again, almost immediately.

This situation called for a drastic measure, and I gave my permission for the doctors to operate on Tucker. This procedure is called a perineal urethrostomy, and involves the removal of what was left of Tucker’s mancatliness after he was neutered. 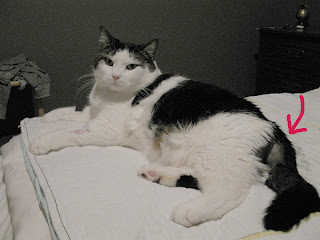 Yes, that’s right. It made me flinch when it was first described to me as a remote possibility when Tucker was initially brought to the hospital for his blockage. It moved from remote to close and then to a certainty. This procedure meant that there would be nothing left to become blocked.

The surgery was performed Saturday. I visited my boy before that. He was rather drugged, and kept trying to nip my fingers. But I think he knew I was there. The operation went well and I was told I could collect him on Monday.

However, the doctor called yesterday afternoon to tell me how Tucker was doing and suggested that he could come home. There was no medical or physical reason to prevent him and, in fact, she, the doctor, thought it would do him some good. My roly poly one had not eaten or drunk, or used the litter box, since his surgery, and it was thought that he would do better at home. I agreed, since Tucker is a very sensitive animal.

When I went to pick him up, the doctor showed me what had been done. I have to admit that I was startled. It looked very ugly. It looked painful and frightening. There were many precautions that I had to take and many things to do for Tucker. He is staying isolated in my bedroom, for the time being, though his spirits seem good. They are dampened principally when I put the plastic collar on him to prevent him from licking his wounds. He has liquid medicine and pills to take; there’s vaseline to put on his sore spot. He has special food that he will be on for the rest of his life. But at least he was home. 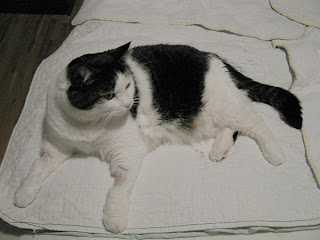 Last night, he acted much as the good old Tucker always did. He purred. My goodness, how he purred. I slept with him on the bed, the other cats barred from the bedroom, unfortunately; it’s thought that keeping him isolated would be beneficial for him, and to put him in a cell alone for the night seemed to undermine the benefits. The other cats, therefore, had to sleep elsewhere. When I got into bed and turned out the lights, Tucker started purring. He was still purring half an hour later. I think he realised then that he was staying with me, and not going back to the hospital.

He ate last night and this morning, he drank plenty of water and, best of all, he wet in the litter-box provided. The doctor had stated that Tucker was able to go at the hospital but just wouldn’t. I figured he would not want to. I had brought some of his own litter to the hospital for his stay there, but they mixed it with newspaper pellets. I knew he wouldn’t go in that. The doctor said that they wanted to avoid the possible contamination from the pine-litter I use. Well, my boy avoided the contamination - by not using the litter at all. Once back home, he had no problem doing what he should.

This morning, he took his medicine like a veteran, ate a good breakfast, drank more water and visited the litter-box. My only worry is slight spotting of pinkish liquid on the soaker pads on which he was lying. It obviously contains blood, but he is not bleeding as such, for the liquid is plainly diluted. Some of it is visible in the accompanying pictures. I have a call in to the veterinarian about it, but I am confident that it is a minor problem. I think my roly poly is on the mend.

This was an expensive process. The only time I laid out more money, I got a house out of the deal. But Tucker is worth it. He’s not even half-way through the lifespan of the average cat, and he is in otherwise good health. He’s such a neat little animal. He deserves the rest of his life. What, after all, is money for but for acquiring and taking care of the things one loves? 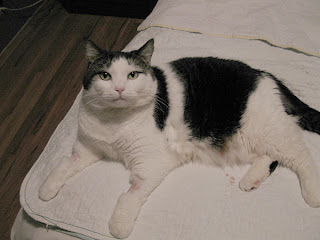