In the continuing drama of Tucker’s condition, I received a new house-guest. Luther is now gone to a foster-home in which he is the only cat, a much better situation for him. Not only is there no one with whom he can fight, but he is out all day and night in the whole of his new house, and no room is barred to him. Furthermore, he has the attentions of not one but three humans, undivided by another animal. An e-mail report to the PAW Society, the group through which he was rescued, stated that Luther was doing well, sleeping on the bed with his new human guardian and in good spirits. He was described as ‘talkative’. Hehehe.

In that orange boy’s place has come Rachael. She is quite different. A quiet, soft-speaking female, she has long hair, grey, black and peach. She is much more diffident than Luther, and reacts more typically to other cats in her new environment. There has been hissing and growling, and even a few fights; Rachael and Renn seem to dislike each other right now. The newcomer has chased Renn through the house, and not playfully. But the situation is nowhere near the problem Luther created. I have confidence that Rachael and the others will sort themselves out, even if there is some disturbance along that road. I can leave Rachael out all day while I’m at work and, there are no signs of battle when I return. Tungsten doesn’t concern herself with the newcomer unless the latter passes too close to her. Tucker will hiss and trot away, while Josie is largely untroubled by Rachael’s presence. 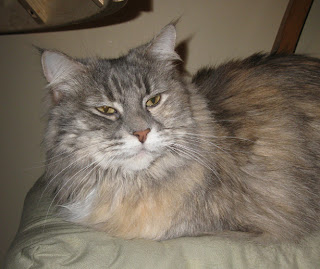 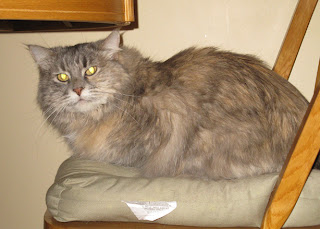 Rachael is a little cat, despite all the hair. She is light, no more than a couple of pounds heavier than the slender Tungsten filament. She communicates through high, long peeps, for the most part, though she can express her discomfort or displeasure well enough. She spends most of her days on a high cat-tree right now; this may be due to some anxiety about the other cats in the household. She usually ignores them, though last night, I heard a ruckus and came out to see Rachael heading for the top of a cat-tree and Tucker looking guilty. The roly poly one has a habit of swatting any passing cat, even one who can administer a beating to his sausage-like form; it's mischievous and means nothing - but Rachael may not know that. 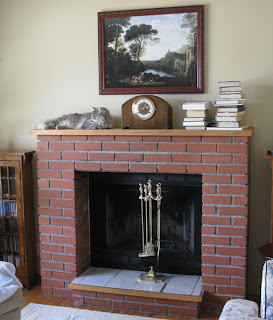 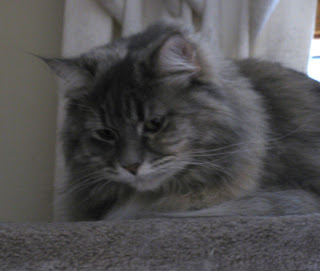 She is a cat whose previous owners decided to ‘downsize’ - in their own terms - their pet population. The PAW Society from whom their three cats were adopted has taken them back. I don’t think the humans took much interest in them when they had them; Rachael has so many knots in her beautiful coat that they will have to be cut out when she is unconscious and undergoing her planned dental cleaning. She also seems to be afraid of soft food, and backed away several times when first offered it. 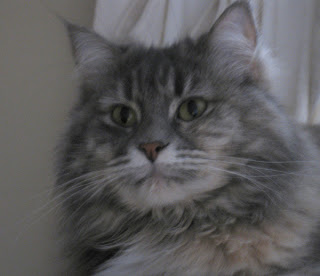 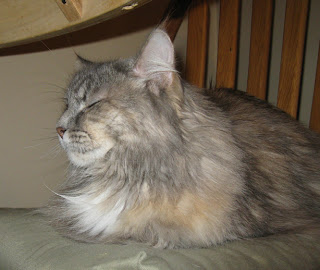 I was told that her previous people called her a ‘recluse’. Renn’s former owners claimed the same thing about him, and Renn loves people, he adores human company. It’s true that he is shy. But being afraid to share yourself isn’t the same as not wanting to. I think the same applies to Rachael. If she wanted to be alone, she would spend her days downstairs in the basement, where there are comfortable chairs, water, a litter-box and food. She doesn’t do that; she chooses to be within sight and sound of everyone else. That suggests to me that she wants company, but is hesitant to trust it - as any animal would be in a new situation.

Rachael has already shown signs of improvement: she has sat on my lap for an extended period, has acquiesced to being held and carried, and even flexed her paws and purred during it. She has a better life ahead of her, I’m sure. I hope it will start with me and my cats. 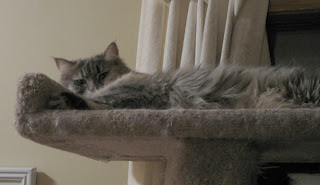