Tucker is recovering from his surgery, though he has some way to go yet. He must now eat a special food and dislikes the two varieties available, and tries to get to the other cats’ regular food whenever possible. He gobbles it as if he’s starving, and it makes me sad to have to turn him away and provide him with food he simply doesn’t want. He doesn’t drink enough water right now, so I have to use a syringe to force a little water into him. He wears a plastic collar when I am not watching him, and that depresses him. He lies very still, doing nothing, when that is on his neck. But at least that will come off eventually.

We go back to the veterinarian next week to have remains of his dissolving stitches taken out and his progress assessed. I hope the collar can come off. He’ll be free to clean his wound as he sees fit and, as we all know, a cat’s tongue can be pretty rough on their skin, and there’s no fur there at the moment to protect it.

But I can still raise a purr from my roly poly from time to time. He showed some interest in playing and was happy for a few minutes, but his heart wasn’t in it. He has to endure a little more before we see the beginning of the end of this episode, and in some aspects, it will continue for the rest of his life. It’s unfair that this terrible ordeal had to occur to Tucker, but then to whom would it be fair? At least Tucker is co-operative in the process and suffers the indignities, discomforts and pain like a trouper.

I want to thank all those who have wished my cat well and have expressed hopes for his rapid recovery. The advice given by those who have commented is also appreciated, and helpful. It’s good to know that others are supportive of Tucker and his fight. 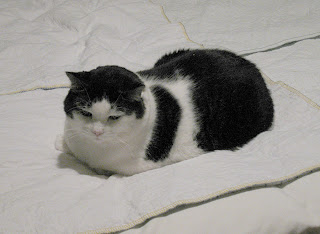