This is a non-feline related post. It is, in fact, the first of its kind on this blog. I am taking this break to point out another blog which I have found, and which I have added to my list of blogs that I recommend readers visit. You’ll find it on the right, at the bottom of the list: Bad Movies for Good People.

This blog describes, very amusingly, a variety of motion pictures, mostly from the 1950s and ‘60s, the majority of them bad, often astonishingly so. The writing (of the blog) is very good and the humour is clean and hilarious. The writer is a fan of movies, knowledgeable in that field, and enjoys describing the awful ones, though frequently with warmth - that is to say, affectionately, though he sometimes becomes heated over the ineptitude of some of his subjects.

The subjects are, in truth, B movies. Many don’t rate above Z, but a few are quite good, and these are given due credit. You don’t need to watch movies much to enjoy this blog, nor do you need to know much about films of the past. You certainly aren’t called upon to admire the movies therein described. But if you want a good laugh, visit Bad Movies for Good People.

Now, I’d better get back to writing about cats. I think I’m suffering withdrawal. But, come to think of it, Bad Movies for Good People has included two pictures of cats in its blog so far, but one was dressed as an astronaut, so that may not count. 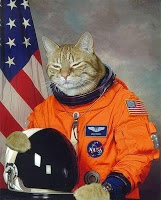