Well, no, Josie isn’t really a bully. She just wants to establish her place in the hierarchy of cats in my household. Tungsten, the tiny terror, is the top-cat. She stalks through the rooms knowing the other felines will acquiesce to her wishes. To be honest, there is little disharmony in my home. Little harmony, either, but not much disharmony. 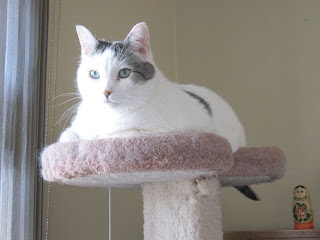 Josie is at an awkward place in the order of things. She is a loner who doesn’t associate much with the others. She’s a female, while the other two under-cats are male, and bigger. She is also a tiny-headed fat animal who’s stealth and agility have seen faster days. So it is perhaps not surprising that she wants to make sure the others know she can take care of herself. 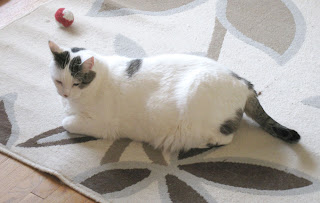 Renn is her preferred opponent. Tucker is too timid to fight any suggestion that he should back down. Renn is shy around people but enjoys chasing the roly poly one, not always for fun, and will, when he catches Josie in the nylon tunnel, exchange blows with her. When the roles are reversed, my Chubs likes smacking at my big boy.

Then, recently, I noticed that Josie would race at Renn when the latter would walk through the sitting room. Josie may be cleaning herself on the rug, observe Renn strolling toward the couch, and prepare herself for a charge. My big boy, upon seeing this, will give the wide one an even wider berth. But Josie will watch Renn’s progress and, when she believes the time to be right, launch herself at him. 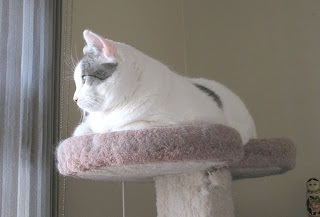 Bear in mind, there is no viciousness in my cats. Josie’s attack will stop abruptly in front of Renn, and the two will swat at each other in a highly ineffective manner. But one, and it’s almost always Renn, will back away. Chastened, he will eventually seek out Tucker and show the roly poly that it is he, and not Renn, who occupies the unenviable bottom of the feline totem pole. But don’t feel too sorry for Tucker; he often brings trouble upon his own melon-head by smacking at one or more of the others, even at Tungsten, as they all come together for dinner. That earns him a hiss, a slap or, once in a while, even a scratch. 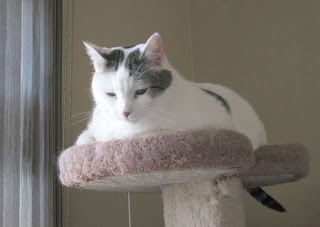 And yet there is closeness among the beasts, too. Josie and Tungsten have been sniffing noses more than ever, and, I’ve noticed, it is usually the great white who initiates it. She still doesn’t like any of the others getting near her, but then sniffing noses was never something common to her either, so maybe some day…

Until then, I will let the animals sort out their situation on their own. I’ll stop anything that seems too rough, I’ll comfort the losers in the mild brawls that occur and make sure everyone knows that he or she is loved. Even Josie the bully.