If you’ve been reading this blog recently, you’ll know that my top-cat, Tungsten, is suffering from hyperthyroidism. This causes her to lose weight regardless of the amount of food she eats. And she has been eating a great deal. The condition will cause a cat to waste away, though it will contract problems with internal organs first, and those may do her in.

Fortunately, Tungsten was able to start treatment before the problem grew large. The blood test that determines hyperthyroidism assigns numbers, arbitrary, so far as I can tell, and called ‘T4’, to the levels that show the condition. (You can see in this picture where she was shaved at the neck to ease the extraction of blood. I’m told that she will allow blood to be taken from the left. If it is attempted from the right, she automatically leaps away.) 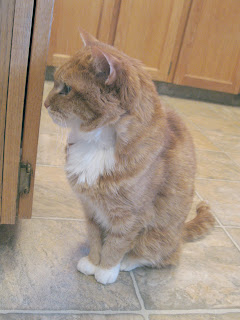 Anything above sixty is hyperthyroidism. Tungsten began at 59.4. She was put on an initial treatment, but that was not for her, and her numbers increased to 73. She was switched to a drug called methimazole, or Tapazole, to give it the brand-name that is being used. She has been on that for a month. Her ‘T4’ numbers this week have dropped to 18. Just 18!

This has been a remarkable development. It must have been, since I am remarking upon it. I knew she was getting better because I have been weighing her, and her weight has been increasing. Bit by bit, my orange one is regaining her poundage. In her healthiest days, she weighed about three and a quarter kilograms. She had dropped to less than two and a half. Now, though, she has creeped her way up to 2.66 kilograms. 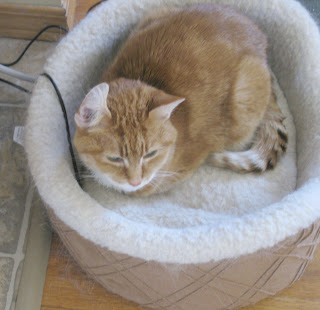 All this is still early-days, mind you, but Tungsten’s veterinary was confident, stating that the orange one need not come back for another medical visit for six months. Tungsten still eats quite a bit, but I think this is a sick cat recovering, and working her way back to where she feels comfortable, just as a human patient, defeating his illness, feels week but hungry, starving sometimes, once he is well again. I feed Tungsten whenever she asks for food, which, unless my imagination is at play, is a little less than it had been. I’ve told her that I want to see her Josie-fat.

Well, perhaps not that big. But the tiny terror is still too tiny, too thin, so I want her to put on a good two pounds, to bring her up to where she was. She has a long way to go, but I am happy knowing that she is gaining ground at last. 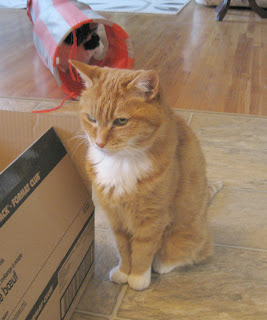