Cats like to be clean. Everyone knows that. They spend a great deal of time grooming themselves, washing their faces, paws, bodies and tails, even their back sides. Each cat, though, seems to have its own method.

My boys are fairly straightforward in their habits. Renn likes a good level surface for his ablutions, either the top of the tallest cat-tree, the floor or the couch in the parlour, which is one of his favourite places to snooze, as well. My big boy has plenty of long fur and he often uses cleaning as an opportunity to get rid of some of it. He goes at it as if he were eating the hair and makes aggressive, throaty noises as he pulls away clumps of unwanted fur. Considering the length and quantity of his hair, I am surprised I don’t find more of it regurgitated about the house. In fact, Renn throws up the least of all my beasts, whether it’s food or hair. He does sometimes leave little, damp mats of fur in various places. Perhaps that’s why he doesn’t give me hairballs - he simply doesn’t swallow any of his refuse. 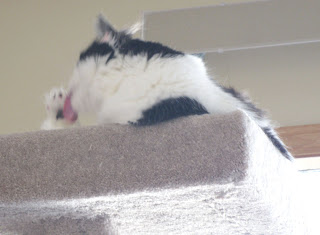 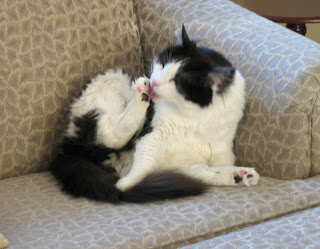 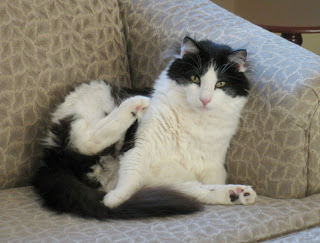 Tucker had a problem with his urinary tract some time ago, and needed cleaning at that time. That problem was not his doing and before and since then, he has been a very clean animal. He too likes a nice settled spot for cleaning, such as the cushioned chair in front of the computer. This has become a preferred location for his grooming, and for his napping. I’ve had to evict him more than once. But unlike my big boy, the roly poly one will lie on the arm of the sitting room couch, another favourite resort, not just for pleasure, but for the purposes of grooming. While in this position, though, he restricts his cleaning to his extremities. Considering his shape, lying on the arm of the couch is quite a feat, and though he can wash his paws there, washing any other body part is probably not a wise idea. 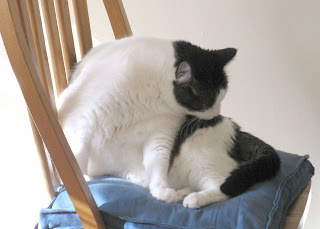 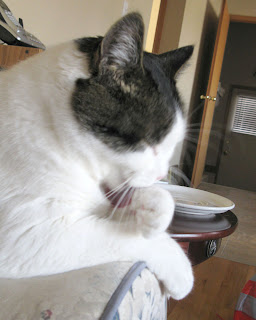 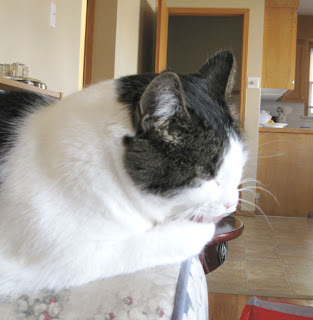 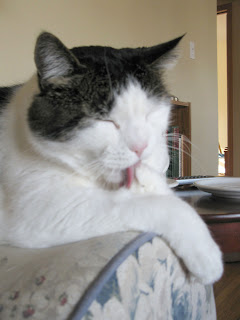 Josie has much to contend with in terms of cleaning. She is a fat cat. She’s not just big, like Renn; she’s fat. She has a little head and a big body; the proportions are wrong for her to claim that she is just a large animal. And it’s not simply hair either, especially since she sheds as easily and as frequently as she breathes. No, Josie is a rotund beast with far too much padding. When she washes her bulk, her tongue resembles a tiny pink window-washer trying to wipe an iceberg. My Chubs cannot reach all her parts that need washing. She certainly gives a good effort. She even raises her leg as if to clean her nether regions, but doesn’t really bother trying, and the leg comes down again. It’s just for show. Except for her bum, she is a most hygienic creature, which shows that her efforts are successful, as far as they go. I have to help her from time to time, using a comb to pull away some of the hair around her unmentionables and, regrettably but only periodically, washing her bum with a warm, wet cloth. She hates that, but doesn’t protest as much as she used. I think she feels better afterward. 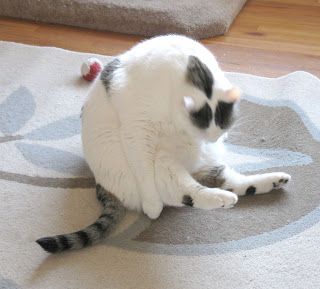 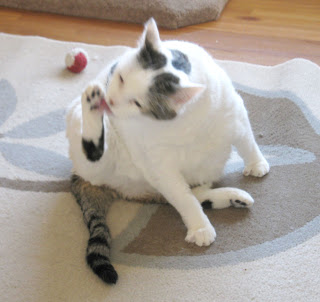 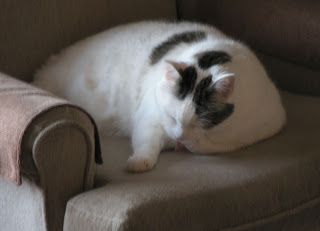 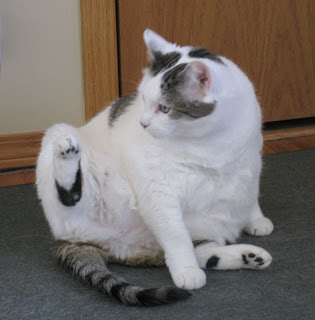 And finally, Tungsten. My orange one is a very clean cat. A friend with the rescue-group with which I volunteer stated that she had never seen such clean ears as she had in the tiny terror. Tungsten is indeed minute, without an ounce of fat, and so can reach all areas of her little body. I have never had to clean her back side. Yet her front side, her mouth, has had to be wiped numerous times. She is the messiest eater in the house, which is strange, taking into account how little she consumes and how much Josie and Tucker gulp down. 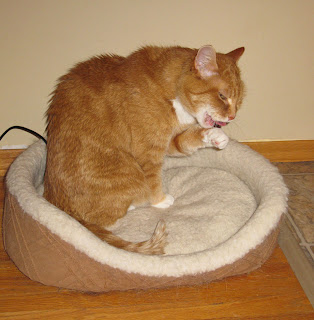 I think it may be due to her missing teeth, which plainly make it relatively difficult for her to grasp food with her mouth. Aside from her table manners, Tungsten is very tidy. She smells pleasant, too, which is strange, and good, since she often shoves her back against my face when we lie down to sleep.

My pets are excellent in their practice of hygiene. They use the litter-boxes with great success and regularity, they wash their faces, and paws, clean their bums - three of them, anyway - and if, once in a while, they throw up, usually on carpetted surfaces, it’s not their fault. They are clean and like to be so, which is fine with me, since if this weren’t the case, I’d have an extra load or two of laundry to do. 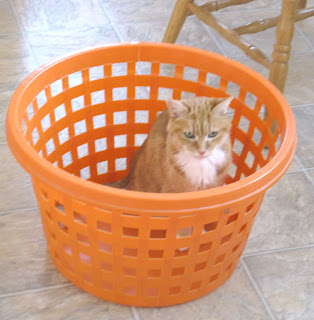