This is Bear-Bear. You may have seen him on the side-bar recently, though he hasn’t been there for a while, his place being taken by Purrdy. That’s because Bear-Bear was scheduled for adoption. He was at the veterinary hospital to have his health checked. All went well, though he had to stay overnight. The people who had agreed to take him in as part of their family, however, could not be reached. So Bear-Bear came to stay with me. 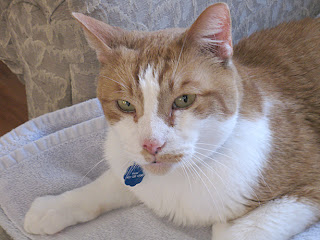 As it turns out, his prospective people have decided not to adopt him. He had already spent two months with them, in their home, and the signs were very positive. The adoption just needed to be finalised. I don’t know why they changed their minds, though they probably had good reasons. The result now, though, is that Bear-Bear is homeless again.

He may be staying with me for the time being. I’m not sure. He is certainly a friendly fellow. He craves attention. He is so anxious to soak up affection that he cannot sit still at first when you offer to pet him. He will step onto your lap, move around, face you, turn, step off, then come back. Only when he tires himself out trying to get the best advantage from every stroke and touch will he consent to lie down and relax.

His first night at my house was undoubtedly a worrisome one for him. He didn’t cry but he did keep up a periodic conversation. His second night was silent and restful (for both of us.) When I returned after work the first full day he was with me, he was so pleased that he drooled for ten minutes straight. He had of course no way of knowing that he hadn’t been simply abandoned in this new location, so he was probably happy to see anyone.

Bear-Bear’s voice is throaty, and he often sounds as though he is growling, but he is not. His purr is rough and rumbly, like my Renn’s, but it is pure joy, nonetheless. He is a cat who not only is happy most of the time, but one who wants to be happy. He is an animal who was born to be a pet, someone’s companion, someone friend. The photographs here make him seem somewhat surly, but his true character couldn’t be farther from it.

He is neat and clean, with excellent hygiene. This is somewhat surprising to me, considering that he may have lived outside for a long time before being found and rescued. His age is estimated to be more than ten years, and his face is that of an animal who has experienced some tough periods of life. Yet he remains cheerful and ready for a friend. Some people and animals are soured by bad times; some are encouraged by them, and want all the more to find the goodness in life, if they can.

Whatever the reason Bear-Bear wasn’t adopted, the people who decided against him will miss a wonderful little fellow. If he stays with me any length of time, I will introduce him - gradually - to the beasts who already live with me. Remembering my attempts to integrate Luther, a previous foster-cat, I am wary. But I feel that Bear-Bear may be different than the rambunctious but loveable Luther. This boy is older, with a desire to be loved. I hope that desire includes other cats. In any case, Bear-Bear’s future will be a good one. It may just take a while for him to get there. 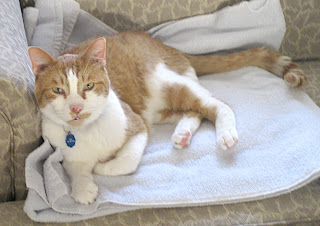