Cammie is a strong-willed little creature. She knows what she likes and what she dislikes, and will let you know which is which. However she was treated before coming to stay with me, she needs to demonstrate that she is not afraid of anything. She will hiss quite readily, not to show hostility so much as annoyance or displeasure. If I am blocking her path, or merely taking up too much of it, she will pass me with one, two, three hisses as she goes, but then permit me the honour of stroking her smooth little head a second later.

But some nights ago, my guest-girl let her guard down.

We have been having an inordinate number of thunder-storms this summer. August is now hot and dry, but for the first week, and throughout July, the weather was unusually heavy and wet. One night a storm rolled in long after bedtime.

Cammie is still confined at night to the back parlour. I feel that she needs to get more used to the perma-cats before her release is constant, and I like, if not to be supervising her freedom, at least to be present during it. So, while I sleep, she is in the isolation ward.

She dislikes thunder, and this night, the thunder was near and loud. It woke me up but, surprisingly, didn’t trouble most of the cats overly much, though I know they could have done without the storm. Cammie, in the back parlour, was crying. I went to see her. There was no false bravery about her now. She whimpered and stayed close to me, very close. She has yet to lie next to me under normal circumstances, but this night, she pushed herself against me. Any closer and she would have been on the other side of me. At one point, she jumped down to the floor and squeezed herself between my feet.

But I knew what she really wanted. I opened the door, and she hurried downstairs, where the sound of the booms was muffled, where she felt safer. I let her remain there until morning.

When the dawn came, the skies were clearing, and the scent of fresh rain was strong outside. Cammie was, with the other beasts, awaiting her soft-food breakfast when I woke. She consented to be petted, but she kept her distance from me, and hissed at the other cats. Things were as they had been. Some day, she may allow me to sit very close to her again, this time without her being afraid.

Until then, she’d prefer me not to write about her regrettable lapse. 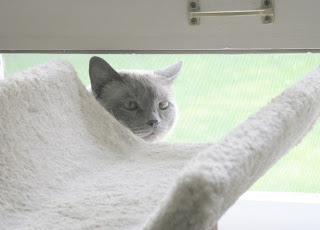