Cammie is now free during each day, even workdays when I am not at home. She can roam the house, causing anxiety to Tucker just by walking by him and occasionally chasing Bear-Bear. The other night, she trapped him in the space under the stairs where the litter-boxes are, and wouldn’t let him out.

But during the night, she is still locked in the back parlour. That will change in a few weeks. I am having the basement re-floored. The carpet, which is less a comfortable covering for concrete than a monument to cats’ intestinal weakness, will be replaced with a type of linoleum. That will occur, I hope, in the middle of September. I figure that several alterations may as well happen at once, so until then, Cammie will stay in the back parlour at night. She doesn’t seem to mind that too much as long as she can have the freedom of the house during the day.

It means her litter-box stays in the parlour, too. I will make the gradual change of moving that downstairs after the new flooring comes. There’s no point in getting her used to going downstairs to relieve herself, only to disrupt it for a few days.

But this means that a litter-box remains conveniently placed for lazy cats who could go downstairs but don’t want to trouble themselves. They don’t always use it, but when they do, Cammie is quite annoyed. She is getting used to it. But she still dislikes such presumption, and in this photograph, she is letting my Chubs know it. 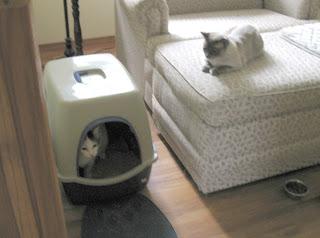